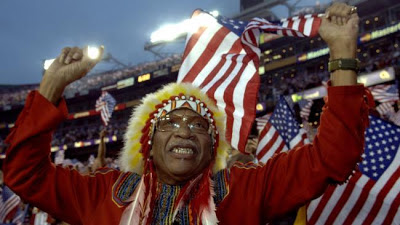 WASHINGTON (AP)  reports — Ten members of Congress are urging the Washington Redskins to change their name because it is offensive to many Native Americans.

The letter to Snyder says that “Native Americans throughout the country consider the ‘R-word’ a racial, derogatory slur akin to the ‘N-word’ among African Americans or the ‘W-word’ among Latinos.”

Among the group sending the letters are the leaders of the Congressional Native American Caucus: Tom Cole, R-Okla., and Betty McCollum, D-Minn.

The nickname is the subject of a long-running legal challenge from a group seeking to have the team lose its trademark protection.

Snyder has vowed that he will never change the name.

Food For thought:  You got to be kidding me. Why are people becoming so "sensitive" to years of ongoing racial bigotry against different ethnic cultures.  We are All Human Beings!!  As an American citizen of bi-racial descendant, including Native American Indian, I don't understand why MEN are still using racial slurs to define themselves.  To protest a football team like the "Washington Redskins" is taking racial prejudices a bit too far.  I'm sure the majority of African Americans who are die-hard fans of the Redskins are also of Native American Indian heritage.
Posted by Syneeda at 7:23 PM

This is absolutely ridiculous! In the year 2013, why is America still dealing with race issues. Let the past be the past and we should all move forward. As long as we continue to allow the pain, suffering and racial prejudices of our past, keep us divided as a country divided, it will only make us more vulnerable!