Army general facing sex charges back in court for hearing 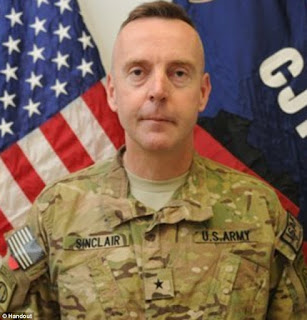 FoxNews.com reported last week – “A U.S. Army general facing sexual assault charges is due back in court for a hearing on pre-trial motions.

A court martial for Brig. Gen. Jeffrey Sinclair is set to begin June 25 on charges that include forcible sodomy, indecent acts, violating orders and adultery.

A military judge on Tuesday ordered two U.S. Army generals to testify about whether they were pressured by top Pentagon officials to charge Sinclair with the alleged sexual assault of a female captain. 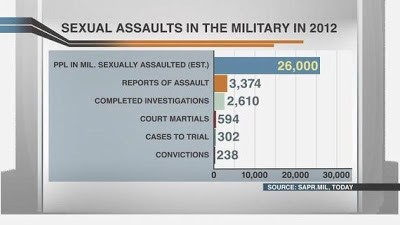 Food for thought:  This week marks the 5 year anniversary of my general courts-martial conviction for adultery.  Unlike General Sinclair, I was charged with conduct unbecoming an officer, which imposes a maximum 16 year prison sentence.  Yet I’m baffled as to why this particular married officer is not being charged with committing the same offense?   Oh yeah, I forget… “Rank, Race and Gender has its’ privilege in the U.S. military.”

So far, I remain the only “unmarried” military officer to be sentenced to prison for adultery, conduct unbecoming an officer and a few other minor offenses.  Meanwhile, my case should have already set a legal precedence to pursue charges against every military service member who’s ever been alleged or have plead guilty to having an adulterous relationship with someone other than their spouse.  Legal precedence established under military case law:  U.S. vs. Penland, May 2008.”


If Sinclair gets off and Petraeus and his mistress, Paula Broadwell continues to remain unscathed for their blatant omission to an adulterous affair, their scandal will only amplify the obvious fraud and injustices within our military justice system!
Posted by Syneeda at 5:53 PM

Jill Vines Loftus, the Navy SAPRO head who wants to train senior officials out of trouble, fails to comply with POTUS. The president has made it clear that he expects quick action to punish sex offenders in the military. Why is the Navy still wanting to try to train itself out of a problem. But, a better question is: What has Jill Loftus done during her tenure as SAPRO? The excalating assaults shows that she has done nothing except live lavishly on the tax payer, traveling around claiming that she and her entourage are fixing the problem. Nice hotels, all-expense-paid travel, and evenings on-the-town for Jill while the sexual assault crisis grows.

You are right, "Why isn't this jerk facing charges for Conduct Unbecoming of an Officer?!" Navy Admirals were able to get away with punishing a "single" black woman for suspicious allegations of committing adultery. The whole world knows that this white guy will more than likely get off. He's hired his "Dream Team" of lawyers and most of the jury panel will most likely be his fellow comrades. Because of the enormous publicity surrounding sexual assault and rape cases in the military, this will be the perfect opportunity to restructure the military justice system and trial this particular case under the preview of the Department of Justice. But that will never happen! This case and the black Army general, Roberts, are cases I will continue to follow as they unfold.

Why did the government go through so much trouble uploading thousands of documents on the internet relating to your case, unless they have something else to hide? It was probably ordered by Jill Loftus. She is always trying to cover her ass as the former IG director. Why is she still getting paid by the tax payers?!