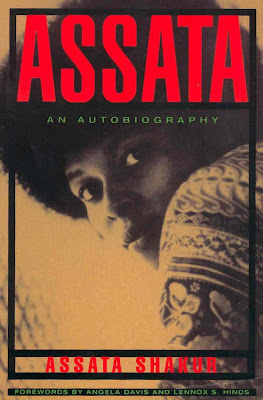 DemocracyNow! recently reported-- "One day after the exiled former Black Panther Assata Shakur became the first woman named to the FBI’s Most Wanted Terrorists list, we’re joined by another legendary African-American activist, Angela Davis, as well as Shakur’s longtime attorney, Lennox Hinds.
Davis, a professor at the University of California, Santa Cruz, is the subject of the recent film, "Free Angela and All Political Prisoners." She argues that the FBI’s latest move, much like its initial targeting of Shakur and other Black Panthers four decades ago, is politically motivated. "It seems to me that this act incorporates or reflects the very logic of terrorism," Davis says. "I can’t help but think that it’s designed to frighten people who are involved in struggles today.
Forty years ago seems like it was a long time ago. In the beginning of the 21st century, we’re still fighting around the very same issues — police violence, healthcare, education, people in prison." A professor of criminal justice at Rutgers University, Hinds has represented Shakur since 1973. "This is a political act pushed by the state of New Jersey, by some members of Congress from Miami, and with the intent of putting pressure on the Cuban government and to inflame public opinion," Hinds says. "There is no way to appeal someone being put on the terrorists list."

TRANSCRIPT-  This is a rush transcript. Copy may not be in its final form.

AMY GOODMAN: "A Song for Assata" by Common. This isDemocracy Now!, democracynow.org, The War and Peace Report. I’m Amy Goodman, with Juan González.
JUAN GONZÁLEZ: Well, we continue to look at the case of Assata Shakur, legendary figure within both first the Black Panther Party and then the Black Liberation Army. On Thursday she became the first woman ever to make the FBI’s Most Wanted Terrorists list. In addition, the FBI and the state and New Jersey doubled the reward for her capture to $2 million.
AMY GOODMAN: To talk about her case, we are joined by two people. Here in New York, Lennox Hinds, Assata Shakur’s longtime attorney, he has represented her since 1973. He’s a professor of criminal justice at Rutgers University. And in Chicago, we’re joined by the world-renowned author, activist, scholar, Angela Davis, also a professor at University of California, Santa Cruz. And she is the subject of a recent film, Free Angela and All Political Prisoners. Angela Davis and Lennox Hinds both wrote forewords to the book Assata: An Autobiography.
We invited the FBI to join us on today’s program, but they did not respond to our request. about Assata Shakur.
I wanted to start with you, Lennox Hinds. The significance of Assata Shakur being put on the FBI’s terrorists list, the first woman ever to be added to the most wanted list?
Watch video of the interview here:
http://www.democracynow.org/2013/5/3/angela_davis_and_assata_shakurs_lawyer
Food for thought:  The more things change, the more they stay the same.
Posted by Syneeda at 2:10 PM