How the VA Got This Bad! 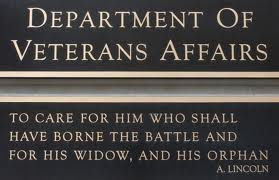 Pogo.com reports--"The spotlight of public scrutiny has turned to the staggering backlog of disability claims at the Department of Veterans Affairs (VA), but how did the backlog get this big?
Kayla Williams at TIME is writing a three-part series on how the backlog got this bad, exactly how bad it is, and what can be done about it.
In the first part of her series, Williams puts part of the backlog blame on a substantial increase in claims while the VA was going through a transition in the system it uses to process veterans’ claims.

[I]magine a kitchen remodel – in the midst of it, with no appliances, countertops, or cupboards, it’s a disaster. But the investment should pay off when complete with a more functional space, more energy efficient appliances, and so forth.
During the remodel, however, you may only be able to eat frozen dinners microwaved in the garage, and anyone seeing this from the outside would only notice a destroyed space and terrible functionality.

In part two, Williams digs into the exact numbers of the backlog and how part of the blame should be aimed at the Department of Defense (DoD).

While awaiting processing, “the veteran’s claim sits stagnant for up to 175 days as VA awaits transfer of complete (service treatment records) from DoD,” the report notes.
After years of work to move toward integrated electronic records that would eliminate this sort of delay, Defense Secretary Chuck Hagel recently conceded that the Defense Department is not holding up its end of the bargain to improve the disability process.
“I didn’t think,” he said flatly, “we knew what the hell we were doing.”

A recent report also found that the VA was hiding excessive wait time for appointments by altering appointment data.
Read full article here: http://www.pogo.org/blog/2013/04/how-the-va-got-this-bad.html
Posted by Syneeda at 11:05 AM