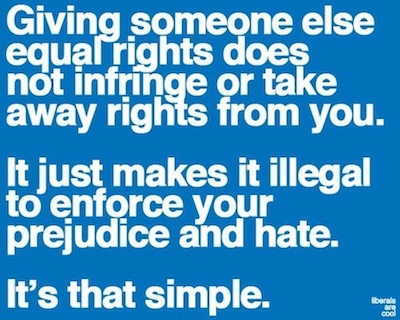 This is a message for all of us, especially for those who are opposed to same sex marriage.  If you haven't noticed the world is experiencing a polar shift which is causing a chemical imbalance of our hormones.

Scientists are still studying human evolution and I'm amazed at the simple discoveries I've come across, most of them have been tucked in medical journals but easily be accessed it on the internet.  After listening to the confession of one of my youngest relatives about their sexual orientation I've come to realize there is so much about the human mind we've yet to understand.   In an adult mind, we would say, "children are too young to understand their sexual orientation, but if you were to go overseas in certain countries, parents are marrying their daughters off after she begins her menstrual cycle.

America claims to be leaders of the free world, so why are we not allowing our children to experience true liberation?!  Is it because parents are too embarrassed about what their friends or co-workers may say about their child’s so-called “abnormal” behavior.

When a child is denied an opportunity to learn how to live in a world as adults classifies as taboo or against the Catholic religion we hinder a child from full growth development.  I don't want to attack someone's religious beliefs on this topic but given the recent controversy with the Roman Catholic church their heinous actions pretty much speaks for itself.
Posted by Syneeda at 8:47 AM