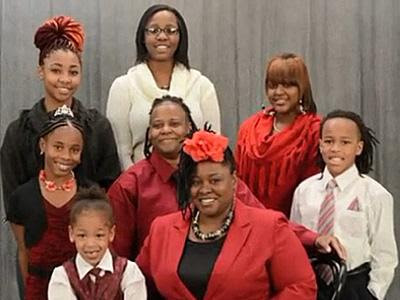 Advocate.com reported -- A Navy SH1 was told that her wife could not be involved in her retirement ceremony, as custom for most military spouses, because of the so-called Defense of Marriage Act.

The Department of the Navy is being asked to intervene in a case where the wife of a Ship’s Serviceman First Class was told that she could not be honored at her spouse's retirement ceremony because of the Defense of Marriage Act, according to a press release from OutServe-SLDN.


Navy Serviceman First Class or SH1 Melissa Smith was finally able to marry her wife TJ Jenkins two months ago in Maryland. After working on the NAS Oceana in Virginia, she is now ready to retire, but her commanding officer will not allow Smith's legal wife to be recognized for her support, as the ritual goes for military spouses. The commanding officer said that because DOMA is still the law federally, he will not allow Jenkins to be recognized at the ceremony.
Jenkins and Smith have also raised six children together. Two are Smith's, and two are Jenkin's, biologically. However, Smith was told that only her biological children will be recognized at the ceremony as well.
“My wife has served our nation for almost 20 years, and this is the way she is treated by her command?” Jenkins said in a statement Friday. “I believe that Captain Geis is being a bully and using DOMA as a shield to hide behind.  He wants to use the terms 'service member’s partner,' when in fact I’m not her partner, I’m her wife!”
OutServe-SLDN Executive Director Allyson Robinson said, in a statement, this is a clear example of how the so-called Defense of Marriage Act provides an inconsistent plan for how the military is supposed to treat same-sex, legal spouses of service personnel.
"As long as DOMA is on the books, commanders will be forced to discriminate, despite the fact that our Commander-in-Chief and Secretary of Defense have made it clear that America’s LGBT service members and their families deserve to be treated fairly," Robinson said Friday.
The inconsistency is evident, since several other military service members have had retirement ceremonies since the repeal of "don't ask, don't tell," which honor their spouses, according to WTKR News.
Stephen Peters, President of the American Military Partner Association, said in a release, that the treatment of the couple is "despicable." He added, "certificates of appreciation have been given out repeatedly throughout the Navy to same-sex spouses since the repeal of 'don’t ask, don’t tell.' It is simply outrageous that this commanding officer is now suddenly trying to use the Defense of Marriage Act (DOMA) as an excuse not to honor the wife of this Sailor at her retirement ceremony.”
Food for thought:   Yet another clear example of how military top brass are  denying our sailors their civil rights, much less their Constitutional rights.
Posted by Syneeda at 12:27 AM

This doesn't surprise, especially coming from the Navy's Aviation community. These egotistical SOBs have always believed they are the cream of the crop, when in fact its the Navy's Ship's services rating. Unfortunately the Navy will only allow their so-called, "best of the best", which was one of the famous lines in the movie Top Gun, to be a Navy pilot. The Navy's flight program is just as racist as its submarine program, nuke program, hell, all of their programs. The Navy has set the record for being the most racist of all the services, Syneeda just look what they did to you. I'm sure if more gays speak out about their mistreatment, it should generate enough support from the LBGT to push for stronger legislation to make sure this sort of racist treatment doesn't happen again!

I support gay rights, they deserve equality the same as any other tax paying citizen.