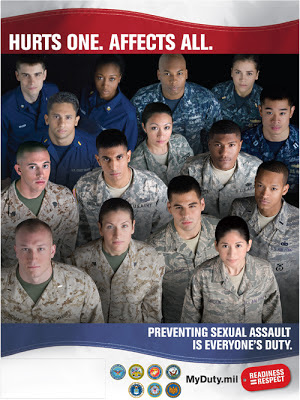 Food for thought:  Upon signing an enlistment contract or commissioning oath of office, is when a veteran proves his willingness to sacrifice his life for his country.  Unfortunately over the past decade, service members have become the aggressive enemy towards one another, resulting in committing acts of human rights violations.  This is condoned under the 1965 Equal Employment Opportunity Act and 1950s Feres Doctrine, which gives military officials the authority to manage its own internal civil and human rights affairs.  These laws are carried out and governed under the Uniformed Code of Military Justice, UCMJ.

This blog post is not intended to promote every detail of my story but to amplify the pain a victim endures after he or she has experienced sexual victimization.

Early last year, after concluding the final chapter of my manuscript, "Broken Silence", I was diagnosed (a month later) with symptoms of PTSD.   For months, while writing the final chapters of my story, I suffered:  panic attacks, insomnia, flashbacks and fear, all while struggling to find the right words to describe my civil rights violations, committed against me by my direct military supervisors.   I’m sure I left out a lot of details.

After watching excerpts from the Senate hearings yesterday, my emotions were triggered once again but this time I had flashbacks to when I was locked away in prison.  I remembered being sexually victimized by the female inmates and prison guards.  The abuse began the first night I arrived at the federal prison when I was ordered to stripe naked and was photographed from every angle.

After each visitation, which was several times a week, I was further violated by the prison guards.  They would always have me wait in the visitation area, after my visitor left, until a particular guard(s) was available.  At times there were two of them.  I was taken to a small room, ordered to strip naked, down to my socks and even eyeglasses.  I never understood the reason for “the search” because the visits were always monitored through a two-way glass and video camera, and the visitors were searched before they were allowed to see me.

During my brief incarceration, I was assigned to live in the general population dormitory as the only commissioned officer, which violates the rules of fraternization.  I was also forced to live among  convicted murders, drug addicts/dealers and a sex offender, convicted of child molestation.  My deferment request to remain under house arrest was denied.  A year before my trail and a year after my release from prison, I was denied my EEO rights and was ordered to work from home.  My only military duties was to call in everyday no later than 0730.

I tried to contact several local California Senators, Congressmen and even the NAACP  for help with my overall case, but they were too afraid to challenge the military.   I sadly realized, after my discharge, so was Senator Grassley!

Because our veteran’s cries goes unheard on the inside of the military's iron curtain, rape and sexual assault victims have been forced to file petitions, contact news reporters and are now testifying before Congress to get our voices heard.

The Department of Defense has an ironclad system put in place which I describe as a fraternal order, it is to preclude any unlawful acts being committed against veterans from coming to light, just Google the "Tail hook" scandal.  I was on active duty when that horrific sex scandal took place and you can read all about the aftermath on the Internet.  Boys will by Boys, and the Big Boys will always provide cover for their “Bad Boys”!

During my 20 years of active military service I saw a lot, as both an enlisted sailor and as an officer. Trust me; it was like I was living in two different worlds.  Needless to say, I learned how to walk the tightrope until I arrived at the end of my career.  It was when I was encouraged by my senior counterparts to begin networking myself to defense contractors, if I wanted to secure a cushy and lucrative post retirement job with the military.  Because I didn't go along to get along I ended up in prison and was kicked out of the military 5 months before reaching my 20-year retirement eligibility.  I was later denied my retirement pension.

The victim’s stories are real and should not be ignored!  When I initially spoke out against my aggressors, I was ordered to be punished, to be put back in my place.  I wasn't sure what was meant by that statement.  Was it because I was a woman?  Or because I'm Black?   Oh well.

I pray the rape victims are able to find relief, because I have.  I finally asked God for forgiveness, for myself and for my transgressors.  And so can you!