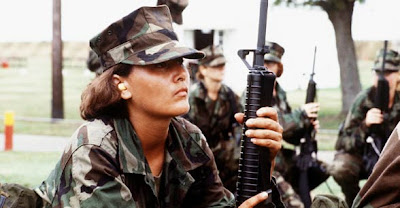 In a recent NPR series, "America's Woman Warriors," correspondent  Quil Lawrence looked at the unique challenges women face in the service, from sexual violence to balancing work and family.
"I think there are questions that we started to ask in the series and we realized we would never have asked a man, how do you balance your commitments to your family and your commitments to the military?"
Lawrence said on NPR. "It just goes without saying; men are men and they go off to war. Women have all of these other issues that, well, American society asks them about. And when they come back, if they've got the same sort of famous thousand-mile stare from PTSD, for me, again, that's expected; for women, why are you being so numb? Why are you unable to relate with your family? And some women don't make it home."
The military is putting more emphasis on research related to how women react differently to war. Some studies have shown that women are twice as likely as men to develop PTSD. The Department of Veterans Affairs released a strategy report last year that examined how it could better serve female veterans.
Kayla Williams, former sergeant and Arabic linguist in a military intelligence company of the 101st Airborne Division (Air Assault), wrote about women at war in "Love My Rifle More Than You: Young and Female in the U.S. Army."
From her piece in the Huffington Post:
I'm used to speaking out about veterans issues, and the special issues that women veterans face. "Used to biting my tongue when I'm asked if I was allowed to carry a gun in Iraq because I'm 'just a girl.' Used to explaining that yes, women are actually in combat, they have died in combat, earned Silver Stars for their valor in combat in Iraq and Afghanistan. Used to being patient and calm and citing facts and figures and statistics to prove my points.
What I am not used to is having a little girl think first of someone like me when she thinks of what a veteran is. Not used to feeling so included, having our service recognized by an outsider without prompting, being ... accepted.
Read full article: http://minnesota.publicradio.org/display/web/2013/03/28/daily-circuit-female-veterans
Food for thought:  PTSD is real, trust me I know.  When the Pentagon kicked me out of the Navy a few years ago, I had been prescribed a highly toxic chemotherapy medication just two weeks prior.
Prior to my separation I never received a full medical, dental or mental health screening and I was left to fend for myself.  While coping with PTSD I chose to write a memoir about my 20 year military experience and it’s been a difficult transition for me to “blend in” with the “so-called” normal society.
After a veteran has seen war and return back home to their roots, it’s difficult for us to simply “close our eyes”, especially after seeing what really goes on during war!
Posted by Syneeda at 10:47 AM

I understand that there is a dire need to address "unprosecuted" military rape cases, but there are thousands of female veterans who are jumping on this band wagon, falsely alleging to have been rape at some point in time during their military career.
Before Congress approves for tax payers to pay the cost of the military's negligence, I say each of the alleged victims should be subjected to a liar detector test. If the victim is telling the truth, she or he should not be offended by this procedure, unless they are lying!