Honoring one of the Navy's Most Highly Professional Leaders, Vice Admiral Michelle Howard 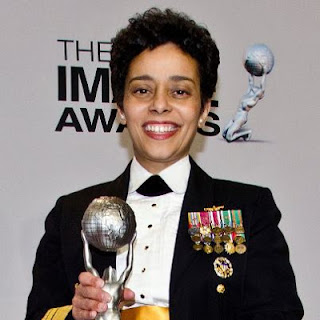 Howard, deputy commander of the United States Fleet Forces Command, received the Chairman's Award, selected by the leader of the NAACP board of directors, Roslyn M. Brock, as a leader who has promoted diversity and community involvement in his or her profession.

In August, Howard became the first African-American woman promoted to a three-star rank in the U.S. armed forces.

In a statement on the NAACP website, Howard said, "I am sincerely touched and honored that the NAACP would choose to recognize me with the Chairman's Award. I have been privileged to serve with our nation's sons and daughters who remain my greatest inspiration."

Before her promotion last year, Howard was as chief of staff to the director for strategic plans and policy for the Joint Staff at the Pentagon.

Last August, she credited Chuck Woodward, her sociology teacher at Gateway High, as a major influence on her professional life."

"She was the kind of student teachers dream about and always hope will be in their class," he said in an e-mail.