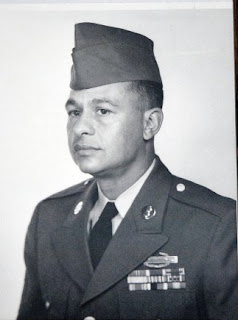 FORT RILEY, Kan. -- When Albert Curley was a noncommissioned officer in the Army, he taught his Soldiers to take advantage of opportunities to better themselves.

"Nothing is given to you," said Curley, a retired first sergeant. "You've got to earn it."

Curley remembers the days of segregation when the Officers' Club was all white simply because there were no African American officers.

Into his 90s, Curley has continued to share his experience as a Buffalo Soldier, a member of one of the all African-American cavalry and infantry units activated between the late 1800s and the mid-1900s, in the hopes that others will seize opportunities to better themselves.

"The opportunity is there if you're qualified," he said.

Curley joined the Army in 1940. Drawn in by a sign hanging in the post office that advertised a wage of 50 cents a day, Curley and several friends went to the recruiter.

"We couldn't find a job for 50 cents a day," Curley remembered. "We got free housing. We got free food. We got free clothing. So that's why we joined the Army."

Curley, fresh out of 11th grade, had to get parental consent to join.

"My mother wouldn't -- she refused to sign, saying I shouldn't go to the Army; I should finish high school," Curley said. "But my older brother signed the papers."

"He forged my mother's signature," he added. "She chewed him out, but it was too late then."

Curley and his friends were shipped by bus from their hometown of Helena, Ark., to Kansas -- first Fort Leavenworth and then Fort Riley. To Curley it may as well have been a whole different world.

"They put us up in tents," Curley remembered.

Curley had to pass literacy tests and a physical before being sworn in.

"They swore us in and they put us in Troop A of the 9th Cavalry (Regiment) at Fort Riley. And this is the horse cavalry, now. It was more horses and mules out there than there was Soldiers," Curley said.

As a member of the 9th Cavalry, Curley became one of the storied Buffalo Soldiers.

"The Indians gave 'em the name the Buffalo Soldier because the buffalo was hard to kill and the horse cavalry -- the Soldiers -- was hard (to kill) … and because their hair was similar to the manes on the buffalo," Curley said.

When asked if he had a sense that he was part of history, Curley shook his head.

"We just went along with it," he said.

Curley remembered his early days at Fort Riley being separate, but equal.

"It was all segregated then," he said. "You was treated as a Soldier."

From equipment to food to clothing, "you didn't get any different from the white Soldiers," Curley said.

Like any Soldier, Curley remembered following orders and staying out of trouble.

"We went where we was told to go and we followed orders," he said.