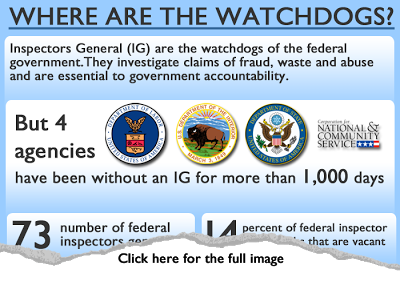 Yesterday, pogo.org reported --  As the Senate began confirmation hearings of John Kerry to become the next Secretary of State today, senior members of the House Committee on Oversight and Government Reform made a bipartisan call to the President to nominate a State Department Inspector General.


“The Department has not had a Senate-confirmed Inspector General since 2008, which is the longest vacancy of any of the 73 Inspector General positions across the federal government,” wrote Committee Chairman Darrell Issa, Ranking Member Elijah E. Cummings, Subcommittee on National Security Chairman Jason Chaffetz, and Ranking Member John F. Tierney in a letter to President Obama.
The letter quotes the Project On Government Oversight’s testimony before the Committee last year to explain why this ongoing vacancy matters:
"Permanent IGs are in a better position to be viewed as credible than are Acting IGs for a number of reasons. One is that permanent IGs are selected for the position on the basis of their qualifications to lead an IG office, whereas a temporary IG may be a good auditor or investigator, but may not be as qualified for a leadership role. That is especially true for the IGs that require a nomination by the President with confirmation by the Senate—they go through a rigorous vetting process, which helps establish that both Congress and the President believe they are qualified for the position."
The House Members concluded, “In the context of the upcoming confirmation hearings for Senator John Kerry as your nominee to become the next Secretary of State, we are sure that the question of who you plan to nominate to serve as Inspector General for the State Department will be a top priority for Members of Congress on both sides of the aisle.”
According to POGO’s IG Vacancy Tracker, the State Department IG vacancy is by far the longest of the eight current vacancies, at five years. The next longest vacancy is that of the Department of Interior IG, at four years. POGO applauds the House members for their call to action, and believes the ongoing IG vacancies should be a top priority for the new Administration.
Posted by Syneeda at 10:49 AM