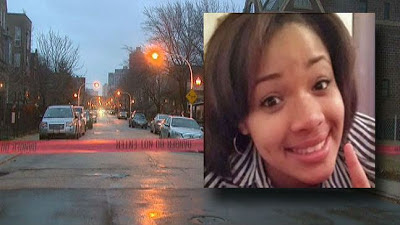 The AP reported today--A 15-year-old majorette who performed at some of President Barack Obama's recent inauguration festivities has been shot to death in Chicago.

Police say Hadiya Pendleton died after she was shot in the back while hanging out with a group of teens in Vivian Gordon Harsh Park about 2:30 p.m.

Pendleton was taking shelter from the rain under a canopy, when an unidentified man or boy jumped a fence and ran toward the group and opened fire, police said. The shooter then fled in a vehicle. The man fled the scene in a vehicle. No arrests have been made.

A teenage boy was also shot in the leg during the shooting, which occurred in the 4500 block of South Oakenwald Avenue, near King College Prep High School.

The pair was taken to University of Chicago Comer Children’s Hospital, where Pendleton died at 3:10 p.m., according to police and the Cook County Medical Examiner’s office.

Police said Pendleton was not a gang member and was most likely not the shooter’s intended target. But most of the teens with her, who also fled the scene, are believed to be gang members, police said.

Residents of the upscale, white-collar neighborhood were dismayed by the shooting, which some said was a first for their block.

"I was torn apart, shocked. I cried when I heard about it," said resident Robin Hollis, who has lived across the street from the park for about 20 years.

Earlier in the day 27-year-old Devin Common was shot dead while two other men were critically wounded in a Greater Grand Crossing neighborhood shooting, according to family members and authorities.

The three were shot shortly after noon in the 7400 block of South Champlain Avenue, police spokesman Michael Sullivan said. Police took at least one person in custody and recovered a weapon, the Chicago Sun-Times reported, citing a source.