Photos of Prince Harry Naked and Partying Hit the Interwebs 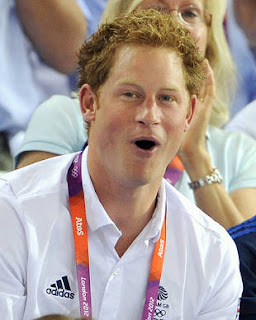 Wetpaint.com reports -
http://www.wetpaint.com/network/articles/naked-photos-of-prince-harry-partying-hit-the-interwebs
Prince Harry is a party animal — and a very nude one at that.

The 27-year-old stripped down to his royal whiteness during a game of strip billiards in his Vegas suite at the MGM Grand Friday night, and TMZ has the photos to prove it.

According to the site, “Harry, along with a large entourage, went down to the hotel bar and met a bunch of hot chicks. [...] Once in the room, things got WILD.”

One photo shows what appears to be a naked Harry hiding behind an equally naked girl, and another features a naked girl cowering behind Harry (or his princely doppelganger) as he cups his nether regions.
These shenanigans came a few days before the Prince's unsuccessful bid to best Olympian Ryan Lochte in a swim race in the XS Nightclub pool at the Wynn early Monday morning.

What will the Queen say about His Royal Ginger's latest escapades? Nothing good, we presume.

I'm certain the young prince will not be charged with public indecency or conduct unbecoming an officer for taking nude photos. Once again, different strokes for different folks and in this case, "Royalty" has its privilege.

Syneeda let's face it, you were definitely shafted, Case Closed!!

Anon... You're absolutely right, I do consider that part of my life, closed! Writing poetry has always been my true calling and I'm so much more happy now. I just thought this story was quiet amusing, "Harry Gone Wild" lol