My poetry book is now available on Amazon.com 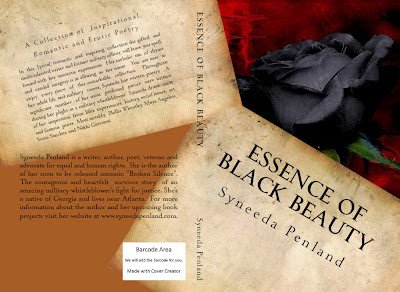 For my viewers, followers and fans who's been anticipating the release of one of my books, my poetry book is now available for purchase on Amazon.com.

"Essence of Black Beauty" is the first volume of a collection of poems I've written throughout my adult life, most of them were written while serving in the U.S. military.

Despite my past setbacks, once I realized nothing, not even a military adultery scandal can keep me from pursuing my God given talents; I've decided to pursue a second career by writing poetry, prose, short stories and song lyrics.

Lately I’ve been working with a fellow Gulf-War veteran to co-author his personal memoir.  He’s as a recovering sex addict and his story is almost as unbelievable as mine.

As a survived victim of workplace abuse I decided to volunteer my services to help him co-author his story.   There are so many forms of abuse towards women and I deeply admire his courage to want to come forward to speak out about his ill-treatment towards women.

For nearly 3 decades, he’s successfully managed to secretly live a double life, as what I would consider to be a "Serial Adulterer".    He’s been married 5 times and has fathered 6 biological children.

He and I met at a local health spa.  After we introduced ourselves as being military veterans we instantly bonded.  Like with all war stories, both of us had some interesting stories to tell.

From one brother to a sister, after he began to share explicit details of his infidelity exploits while stationed overseas in Germany, he had my undivided attention.

For several years, as a married teenage soldier, he was able to satisfy his craving for sex in the "Red Light" district of Germany.    The “Red Light” district is a designated prostitution area near an overseas U.S. military base where military veterans, U.S. government representatives and civilian defense contractors can go to engage in legalized prostitution.

After leaving the Army, he continued to pursue his desire of wanting to enjoy the touch, the feel of a woman and even the "chase" of  women.  Long after he would quench his thirst for sex, he would take his addiction one step further by walking his former brides down the aisle to the altar.  As a father and married man, he continued to have sex with dozens (if not hundreds) of women, showing little or no respect to his (at the time) wife.

His story almost reminds me of Senator John Edwards!  Remember the recent scandal with the U.S. Secret Servicemen….. His tales provide a similar situation.

For hours, I’ve listened to another veteran describe, almost in exact detail, what I personally witnessed while I was stationed in South Korea in 2004-2005.  The only difference is, his military sexual exploits took place in Germany during the first Gulf War, in the late 80 to early 90s.

Twenty years later, I would become the first and only non-married female military veteran to be unlawfully prosecuted, sent to prison and kick out of the military on specious charges of committing adultery.  I was subsequently denied my military pension.

After recently speaking with a number of disabled male veterans at the Atlanta VA hospital, a few retired military officers and even my step-father; who served in Germany during the Vietnam War, each of them confirmed that visiting areas like the “Red Light” district was highly recommended by senior military officials, and is “officially” authorized.

And yes this behavior is still going on in Tijuana Mexico, just across the San Diego-Mexican border!

In the military, it doesn't matter whether a man is married or single, when a man has to lower his testosterone levels what better way to do it than treating the men to services at a legalized brothel?!

After serving in the military for over 20 years, I'm fully aware of how senior military officials allow male veterans to relieve days, weeks and sometimes months of built-up stress…

When I was working alongside all those men while being deployed overseas, I’d learned to turn a blind eye to what I saw on board one of the Navy’s warships.  Let's just say, when you are working on board a Navy ship with only men, it’s hard to ignore everything you see.

Once, I personally witnessed a secret group of enlisted men labeling themselves as the “Pink” and “Baby Blue” crew, which was a way to identify who was gay or bi-sexual.

I can easily co-relate this scenario with the prison industrialized system, when gay prisoners resort to lowering their pants for what they consider to be “easy access”.  Unfortunately, this has become a hip-hop clothing trend within the black urban community, also known as “pants sagging to the ground”.

On the ship, "pink" indicated that the sailor considered himself as being strictly homosexual and "baby blue" meant he is "married but on the down-low or bi-sexual".

Thanks to President Obama, the LBGT can now serve in the U.S. military in an openly professional environment, hopefully without fear of having their civil or human rights violated!

My story (case), along with the thousands of military rape cases will truly prove that there’s a significant disparity of how women are being treated in the military oppose to the preferential treatment given to men.

Wow, Syneeda, Your story get more and more interesting by the minute. I'm truly surprised why you didn't speak out about this sort of thing earlier. Obviously you served behind the military iron curtain for too long, the U.S government, politicians, the military and corporate big businesses have been robbing and stealing from the pockets of all Americans, dating as far back as the war against the Native-American Indians.

Yes, I purchased you poetry book and see that you were born in Georgia, near Dr. King's birthplace. Also the birthplace of the Civil Rights movement. Your fight with the U.S. government military will never be won because you can't beat greed. Because its the outer core which protects every Caucasian American. Which has been falsely lead to believe that their skin color is better than all other persons of color.

As a humanitarian, Dr. King believed in preserving the human rights of each and every human, which is why he was awarded the Nobel Peace prize. Your story is truly remarkable because it is a story not only of tragedy, but one of survival and triumph.

I prayed that one day you would wake up to see your story for what it truly is, "INJUSTICE"!!

It is truly unfathomable that senior U.S. military officials thought they could get away with charging you and discharging you from the Navy on specious grounds of committing adultery.

Dating as far back to the Roman empire era, raping women, sometimes children; has always been considered "spoils" of war. Just when did top generals and admirals decide to change the "Art of War"?

It's it within their "unwritten fraternal doctrine" that any man serving in the military can enjoy ALL the spoils of war, married or unmarried. Why did you think the married husband was never brought up on officials charges, because he is well aware of the RULES!!

Instead, these hypocrites decided to charge with committing a "military crime", that each and every last one of them gets a free pardon. Even those who are alleged to have raped fellow male and female veterans. Why do you think "Gay" men are massing together, they already know what the military men are capable of, hell at the end of the day, they are also men!

Like their Christian bible says, "Let he who is without sin, cast the first stone."

Jesus came to your feet long ago my child, and he has carried you through the storm, and you have arrived back on the shores of earth to witness the wrath of his path!