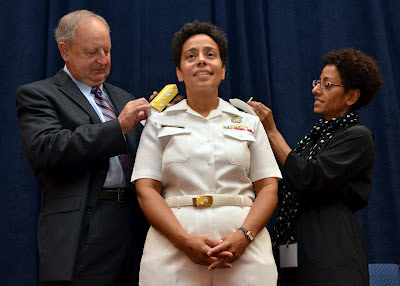 Syneeda, I occasionally pop in to read what you have to say and I agree with your underlying mantra of equality, justice, and fair treatment, but can’t help noticing the racial preference.

Some time back you made a posting about general William “Kip” Ward. Your suggestion was that he may have been getting a raw deal. There’s a recent Stars and Stripes article discussing the results of an investigation. You can read it at http://www.stripes.com/news/ward-unlikely-to-face-court-martial-for-africom-misdeeds-1.187114

More postings are appearing on the article but on that I found interesting was a posting by Robert, responding to Eric’s post and I've pasted it here.

“Eric...you need to come to Heidelberg around the Christmas Market time. You can't even count the number of senior officers and spouses who suddenly feel a need to come to Germany for "official business." They troop through the MWR and child care facilities pretending to be doing a review of these high visibility quality of life arrangements, and then scoot out to the Christmas Markets at the speed of light using official vehicles with drivers and sometimes even security details. I am retiring next year, and it can't come quickly enough as I get sick to my stomach watching the abuse of taxpayer money that is endemic in the US Army, and epidemic at the senior officer and SES level.

As for "Kip", the man failed miserably as head of AFRICOM. Look at Mali. That started on his watch, and his organization did nothing...absolutely nothing to stop or even slow down the islamic takeover which did not even have popular support. A little support at the right time would have prevented that mess, but no...he was too busy worrying about how big his hotel suite would be on his next TDY, and which family members and friends he could include in his jet. Somali piracy increased approximately 20% during his time as head of AFRICOM. Islamic revolutions occurred in two African countries, and another was getting ready to launch before he left (Egypt). He took countless trips, being wined and dined by corrupt heads of African states, and was unable to find a home for AFRICOM on the continent. I am sure that Mali would have been happy to have them....but o...I forgot...no 5 star hotels in Mali. Farewell to a failed leader.”

Enough said about Kip. You’ve now congratulated the new Vice Admiral. It’s only a matter of time until accusations are made against her as well, because, well, there just isn’t a single one of these flag or general officers who hasn’t engaged in fraud, waste, and abuse in one way or another. The Stars and Stripes article postings seem to suggest that as well.

I am trying to recall a timeline and believe that the Vice Admiral, when still a lowly one-star, ran the secretary’s front office. If the timing is right, there is no doubt your case came to her attention. The bottom line is that nobody cared that you were exposing fraud, waste, and abuse, and that reprisal actions were in high gear. This is just another example of the higher-ups failing in their duties.