Reining in Wasteful Defense Spending: End of the World as We Know It? Or Common Sense? 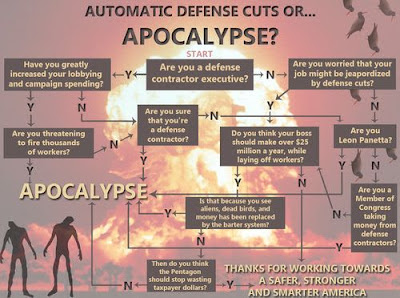 Project on Government Oversight reports - The Mayan calendar implies that the world is going to end this December—but the defense industry seems to be holding out for Jan. 2. That’s when the Department of Defense will start getting hit by about $500 billion in across-the-board cuts (also known as "sequestration"), spread out over the next decade (unless Congress manages to intervene.)
Listening to the big contractors, you’d think sequestration was the first sign of the apocalypse. Defense Secretary Leon Panetta has called the cuts a “doomsday scenario.” And collectively, the top five U.S. defense contractors have already ramped up their spending on lobbying by 11.5 percent compared to last year, according to NextGov.
Lockheed Martin, the largest U.S. defense contractor, is also threatening to lay off thousands upon thousands of workers, a move that experts—including Project On Government Oversight national security expert Ben Freeman—are calling a “political stunt” intended to push Congress to act.
According to Freeman, defense contractors may be playing Chicken Little, but they have plenty of revenue to fall back on. Even if contractors bore every single sequestration cut, they’d still be getting “more than $300 billion a year from taxpayers.”
If Panetta is really so concerned that sequestration is going to lead to an apocalyptic scenario, maybe he should start looking at the tremendous amount of taxpayer dollars wasted on contracting, instead of promising to preserve “the  health and viability of the nation's defense industrial base." Not to mention, he could start cutting the other hugely wasteful weapons programs POGO has outlined.
No one actually wants sequestration. But as POGO’s Winslow Wheeler tells me, even in a worst-case scenario, Pentagon spending will drop to a level that is still three times that of China, Russia, Iran, North Korea and Syria—combined, and still $30 billion above what the U.S. spent on average during the Cold War.
“It is a historically generous amount of spending for the Defense Department,” says Wheeler. “However, no one in Congress seems willing to stand up to the defense corporations.”
We’ve designed this handy chart to help you decide whether or not you’re on the defense contractor apocalypse train—or if you’re thinking rationally about defense spending. As Robert Frost would (maybe) write, “some say the world will end in fire, some say in ice…and contractors say it’s taking five dollars away from the F-35 fighter jet.”
Posted by Syneeda at 9:20 AM