What a tangle web weave when we first practice to deceive!! 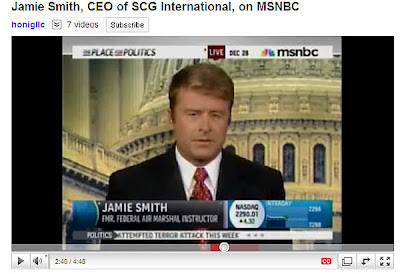 By Bill Sizemore
The Virginian-Pilot
© July 25, 2012
VIRGINIA BEACH
The Air Force continued doing business with a Virginia Beach government contractor for months after the company was found to have engaged in a $9.5 million fraud.
Federal contract documents show that the company, SCG, has collected more than $1.7 million from the Air Force for security training services since August, when a jury found that SCG and its chief executive, Jamie Smith, defrauded a Pennsylvania couple in an investment deal gone bad.
The couple, Craig and Mary Jo Sanford, have not recovered any of the $12.5 million they invested with Smith in 2007, their attorney said last week.
The Sanfords are pursuing Smith in state court in Virginia Beach in an effort to collect their money.
A spokesman for the Air Force's Air Education and Training Command, the contracting agency, said the command questioned SCG after the fraud finding and was assured that the company named in the jury verdict was a different corporate entity than the one under contract.
Nevertheless, spokesman David Smith said, the Air Force declined to exercise its option for an additional year and let the contract expire April 30.
Meanwhile, it appears that SCG is defunct and Jamie Smith has left the country.
"I had to seek employment out of the USA in order to raise funds for new Counsel," he wrote in a pleading last month with the 4th U.S. Circuit Court of Appeals, where he is appealing the fraud verdict handed down in last year's civil lawsuit.
In a brief email exchange with The Virginian-Pilot last week, Smith would not reveal his whereabouts.
A public relations representative for Smith, Yuri Slavik, said only that Smith "no longer resides in Virginia" and "is presently occupied with a book project."
At Smith's last known address, a 4,385-square-foot, $547,000 home with a backyard pool in the Pungo section of Virginia Beach, a huge three-day sale of household goods was held July 13-15. Thousands of items were put up for sale, including antiques, collectibles, electronics, minks, sporting goods, gun cases, survival gear and a hand-painted chandelier.
Smith, 42, has a colorful history as a purported CIA operative, an executive at the high-profile security firm Blackwater, and a self-proclaimed security expert who appeared frequently on national cable newscasts.
In an interview with a TV station in his native Mississippi last year, he claimed to have had a role in training the Virginia Beach-based Navy SEALs who killed al-Qaida leader Osama bin Laden in 2011.
More recently, in emails released by WikiLeaks.org in March, Smith claimed to have taken part in the killing of Libyan dictator Moammar Gadhafi and said he was working to help bring about regime change in Syria.
Craig Sanford met Smith in 2007 shortly after reaping a financial windfall from the sale of a medical waste hauling business, according to the federal lawsuit he and his wife filed later. Smith was said to have portrayed himself as a successful entrepreneur in the security business with "a unique ability to invest funds overseas."
Smith was alleged to have guaranteed Sanford a 10 percent annual return on his money, whereupon Sanford turned over $12.5 million in return for a promissory note signed by Smith.
One of Smith's employees, a disbarred lawyer named Troy Titus who later went to prison for investment fraud, characterized the money in an email to Smith as a gift from God, according to the federal lawsuit.
And in April 2009, SCG's attorney called Sanford with the news that the money had all been "lost in the stock market."
Following the fraud verdict last August, when the Sanfords were awarded a $9.5 million judgment, they were told Smith had turned over his interest in the company to his brother, Todd.
Since then, the Sanfords allege in their state-court lawsuit, SCG has made dozens of illegal payments totaling more than $500,000 to Jamie Smith, Todd Smith and their wives.
In essence, the Smith brothers have been treating SCG as "their personal bank account," using a variety of corporate entities created to conceal and launder the company's assets, the Sanfords allege in a recent court filing.
"The family has been living off the company - living off the assets, most of which were purchased with my client's money," said Chap Petersen, a Fairfax attorney and Democratic state senator who represents the Sanfords.
George Doumar, an Arlington attorney who represents SCG and Todd Smith, said his clients "will vigorously contest the allegations."
SCG and Todd Smith have asserted in court papers that the transfer of ownership was meant not to evade creditors such as the Sanfords but to repay money that Todd Smith had advanced the company while Jamie Smith "wasted or lost millions of dollars."
Doumar said SCG now has "no ongoing revenue."
A training facility that SCG operated in Holly Springs, Miss., has shut its doors. A historic house in Holly Springs that the company had bought to house trainees is in foreclosure.
"The thing that really irritates me," Petersen said, is that for months after the fraud verdict, "the federal government, with our tax money, continued to throw money at this family."

I was ready to stop reading. After all, you're supposed to be about "Injustice, Corruption, Veteran Advocacy Support and telling the truth." I haven't seen that in too many posts and too long. No one is commenting, including yourself. I wondered if you lost course. This appears to be the first relevant item in some time.

Anon, I've been busy working on several book projects and haven't had much time to focus on my blog. I found this story interesting this morning and wanted to share...

Syneeda this is almost similar to your case, after the Dod IG found Sturgess in violation of breaking the law, he was allowed to retire from the Navy with his full pension and was later rehired as a defense consultant advisor for top defense consultant firm, Booze Allen Hamilton, under a subcontract with Logistics Support Inc.

You will see that the report LSInc guilty of breaking a number of Sherman Anti-Trust violations and defense contract fraud and mismanagement. It was never publicly know that LSInc was under investigation. Following the outcome of the investigation the company was allowed to do business with the government and has since been awarded multi-million dollars of additional defense contracts.

How is this possible for a company that was reported to have broken the law, was investigated and found guilty of breaking the law, allowed to be awarded more defense contracts over more competitive companies?

Syneeda, This further proves your command officials had targeted you. Wiggan, the married person in the alleged adulterous affair was never charged with committing adultery. His CO onboard the PRinceton never investigated the allegations, instead he promoted Wiggan and awarded a Navy Commendation as his end of tour award, the year following receiving the adultery allegations. Wiggan is still serving on active duty. But Sturgess, your CO brought charges against you, several months after he learned you reported him to his bosses for committing financial fraud and it was discovered during IG investigation that he had also committed other federal violations, relating to receiving personal services from an employee hired by defense contracting company LSInc.

In your complaint you reported fraud being committed by Sturgess and a few of his Navy Academy alumni buddies and each of them (who are stock holders with the company LSInc) were rehired by LSInc as defense consultant advisors. Under a number of subcontracts with the company.

You on the other hand, was prosecuted and convicted of adultery (charges brought forth by Sturgess) and later kicked out of the Navy and denied your pension.

This kind of fraud goes much further than an O-6. There are others wrapped-up in the fraud all wanting to cover for each other for personal gain. These things go all the way up to the service secretaries who fail to act on the problems and take the easiest way out. The easiest way is to find a scapegoat and make counteracusations, such as in Syneeda's case, or when the heat gets to be too much, you don't renew a contract. But, that only happens when there is attention brought to the fraud. In the mean time, the corrupt government officials are getting a piece of the action with promises of more to come. It's simple greed by the corrupt that is ruining this country and the so-called leadership only wants to hush it up.

Ditto on Anon's post. Hushing things doesn't fix the underlying, systemic problem. The only way to fix that problem is to prosecute the corrupt and send a message that you can't get away with it. Hushing the problem fixes nothing.