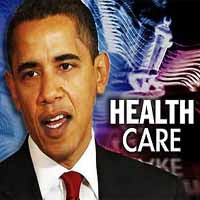 The 5-4 decision means the huge overhaul, still taking effect, will proceed and pick up momentum over the next several years, affecting the way that countless Americans receive and pay for their personal medical care.

The ruling hands Obama a campaign-season victory in rejecting arguments that Congress went too far in approving the plan. However, Republicans quickly indicated they will try to use the decision to rally their supporters against what they call "Obamacare."

Stocks of hospital companies rose sharply, and insurance companies fell immediately after the decision was announced that Americans must carry health insurance or pay a penalty.

Breaking with the court's other conservative justices, Chief Justice John Roberts announced the judgment that allows the law to go forward with its aim of covering more than 30 million uninsured Americans.

The justices rejected two of the administration's three arguments in support of the insurance requirement. But the court said the mandate can be construed as a tax. "Because the Constitution permits such a tax, it is not our role to forbid it, or to pass upon its wisdom or fairness," Roberts said.

The court found problems with the law's expansion of Medicaid, but even there said the expansion could proceed as long as the federal government does not threaten to withhold states' entire Medicaid allotment if they don't take part in the law's extension.

"The act before us here exceeds federal power both in mandating the purchase of health insurance and in denying non-consenting states all Medicaid funding," the dissenters said in a joint statement.

Kennedy summarized the dissent in court. "In our view, the act before us is invalid in its entirety," he said.

The legislation passed Congress in early 2010 after a monumental struggle in which all Republicans voted against it. House Republicans announced in advance of the ruling they would vote to wipe out whatever was left standing by the justices, and GOP presidential candidate Mitt Romney has joined in calls for its complete repeal.

After the ruling, Republican campaign strategists said Romney will use it to continue campaigning against "Obamacare" and attacking the president's signature health care program as a tax increase.

"Obama might have his law, but the GOP has a cause," said veteran campaign adviser Terry Holt. "This promises to galvanize Republican support around a repeal of what could well be called the largest tax increase in American history."

Democrats said Romney, who backed an individual health insurance mandate when he was Massachusetts governor, will have a hard time exploiting the ruling.

"Mitt Romney is the intellectual godfather of Obamacare," said Democratic consultant Jim Manley. "The bigger issue is the rising cost of health care, and this bill is designed to deal with it."

Justice Ginsburg said the court should have upheld the entire law as written without forcing any changes in the Medicaid provision. She said Congress' constitutional authority to regulate interstate commerce supports the individual mandate. She warned that the legal reasoning, even though the law was upheld, could cause trouble in future cases.

"So in the end, the Affordable Health Care Act survives largely unscathed. But the court's commerce clause and spending clause jurisprudence has been set awry. My expectation is that the setbacks will be temporary blips, not permanent obstructions," Ginsburg said in a statement she, too, read from the bench.