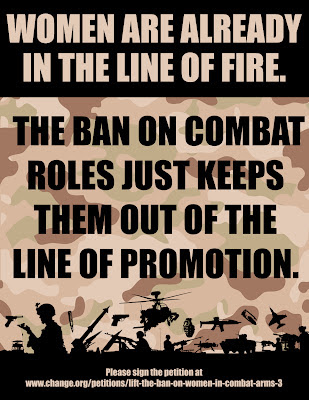 A federal lawsuit inspired by a University of Virginia School of Law project was filed Wednesday against top U.S. military officials to seek the reversal of military policies banning women from serving in combat roles.   http://www.law.virginia.edu/html/news/2012_spr/combat_exclusion.htm

The complaint, filed in the U.S. District Court for the District of Columbia, alleges that the Defense Department and U.S. Army are violating the law and infringing upon the constitutional rights of military servicewomen by excluding them from certain ground combat units and other positions solely on the basis of their sex.

The lawsuit was brought through the efforts of the Molly Pitcher Project, a group of Virginia Law students led by Professor Anne Coughlin who explored whether the combat exclusion policies could be challenged in court, whether the policies have a detrimental effect on servicewomen and whether those women wanted to seek legal redress. (More)

"The ultimate objective of the Molly Pitcher Project is to open the profession of combat arms to women on an equal basis to men," Coughlin said. "We want to eliminate this last vestige of formal discrimination against women by the federal government, and ensure that women in the military have the same opportunities and the same obligations as men. No other employer in the country may tell a woman that she is barred from the job merely because she is a woman.  It is time for the Pentagon to stop relying on sex as a proxy for fitness to serve."

The project reached out to a number of stakeholders, Coughlin said, and servicewomen began to step forward to discuss their experiences under the policies.

"At that point, we recognized immediately that we needed to retain the services of experienced and sophisticated lawyers," Coughlin said. "As soon as women came forward with legal claims and told us that they were concerned about their rights and their futures under the current policies, we knew that we were obliged to bring on board the best counsel that we could find."

In the initial phase of the project, former U.S. Air Force Major and F-16 fighter pilot Tally Parham '96, provided counsel for the effort.  Then, as the project moved towards litigation in the District of Columbia, the law firm Covington & Burling took the case on a pro bono basis. Christopher Sipes, a lecturer at Virginia Law and a partner in the firm, is serving on the legal team.

The lawsuit seeks a declaratory judgment that the Defense Department and Army combat exclusion policies are illegal and unconstitutional because they violate the plaintiffs' right to equal protection under the Fifth Amendment, and they violate the Administrative Procedure Act. The lawsuit also seeks a permanent injunction against any further enforcement of the military's combat exclusion policies and a mandate requiring the military to make all assignments and training decisions without regard to sex.

Attorneys from Covington & Burling filed the claim on behalf of two decorated U.S. Army Reserve officers, Command Sgt. Maj. Jane P. Baldwin of Tallahassee, Fla., and Col. Ellen L. Haring of Bristow, Va., who allege that their careers were and continue to be held back because of the military's combat exclusion policies.

Baldwin, who began her military service in 1987, has held multiple positions in the Army Reserve and has been deployed to South Korea and Iraq.

As a direct result of the policies, Baldwin was prevented from applying to two separate positions. One of these, a combat-coded post, was a first sergeant position in a new unit in Florida. Baldwin had extensive experience building up a new Army Reserve unit, having built a unit from the ground up while serving as a first sergeant at Company E, Small Arms Readiness Group at Fort Dix, N.J.

"This experience made her well-suited to the First Sergeant position available at 344th Engineer Company (SAPPERS)," the complaint says. "Despite this background and expertise, she was not even permitted to apply for the position because the DOD Policy and the Army Policy exclude her from consideration solely because of her sex."

Also as a result of the policies, Baldwin was banned from applying for a civilian position as a unit administrator with the 344th Engineer Company.

"There is no rational basis for banning Command Sgt. Maj. Baldwin from applying for positions for which her background and expertise is well suited, on the sole basis that she is a woman," the complaint says. "The DOD Policy and the Army Policy have generally prevented Command Sgt. Maj. Baldwin from pursuing her career in the Army Reserve to the full extent of her capabilities, qualifications, and potential."

Haring has served 28 years with the Army, holding positions including platoon leader, commander, executive officer and bridge commander. Also, she served for three years as an associate professor at the Army's Command and General Staff College. She is currently serving on the Joint Staff as a Joint Concept Officer for the Joint and Coalition Warfighting Center in Suffolk, Va.

The combat exclusion policies have affected Haring's career choices and opportunities from the outset of her career, the complaint alleges.

"Specifically, from the beginning of her military career, her options were limited to support positions with no possibility to compete within the combat arms," the complaint says.

At the mid-point of her career, Haring switched her specialty to civil affairs so she could become a supporting member of Special Operations. Yet when she applied to a non-combat support position in Special Operations Command, she was passed over for the position and it was awarded instead to a lower-ranked Special Forces–qualified male.

"Accordingly, despite her other qualifications and her association with the Special Operations community, Col. Haring's lack of Special Forces branch qualification — a direct result of the combat exclusion policies — impacted her ability to obtain the job," the complaint says.

The Defense Department's combat exclusion policy specifically bans women from assignment to units below the battalion level whose primary mission is to engage in direct ground combat and from assignments in closed military occupational specialties, such as infantry, as well as assignments to units engaged in long-range reconnaissance operations and special operations forces missions.

"These bans exclude women from thousands of positions in the armed forces, no matter how qualified the women may be as individuals," the complaint says. "Women are excluded from officers occupations in armor, infantry, and special forces; and female warrant officers are prohibited from serving in Special Forces. Enlisted women are excluded from serving in certain infantry specialties, combat engineer, field artillery specialties, special forces, armor specialties, and armor or artillery mechanical maintenance specialties."

Additionally, the Defense Department's policy allows the exclusion of women "where job related physical requirements would necessarily exclude the vast majority of Service members," though it does not define the physical requirements for these specialties. The policy also says women may be excluded from assignments where "the costs of appropriate berthing and privacy arrangements are prohibitive."

As a result of these policies, the complaint alleges, women are systematically hindered in their ability to pursue careers in the military that are associated with promotion to top officer grades and other career-enhancing assignments.

"The material impact of this 'structural barrier' is stark; as of 2006, 80 percent of general officers in the Army, ranks 0-7 and above, 'came from combat arms occupations,'" the complaint says. "These are the precise occupations that the DOD and Army policies formally close to women with no rational reason."

Women constitute roughly 14.5 percent of the 1.4 million active military personnel, and have served in key roles in Afghanistan and Iraq, including as fighter, bomber, attack and helicopter pilots; in ground support positions; and by manning checkpoints to conduct searches of Afghan and Iraqi women.

"The DOD and Army polices were developed at a time when wars were fought on a linear battlefield," the complaint says. "The linear battlefield no longer exists. Rather, the battlefields in Iraq and Afghanistan are nonlinear, containing no 'forward area' as contemplated in the [1994 memo articulating the direct ground exclusion rule]."

Rising third-year law student Rebecca Cohn, a member of the Molly Pitcher Project, said she is excited and optimistic about seeing the case move forward.

"This has been a long time coming — women have been fighting in ground combat in Iraq and Afghanistan, performing with utmost valor and professionalism while receiving no formal recognition," she said. "I am so proud of the students, attorneys and military women involved. The time is right for change."

Kyle Mallinak, another member of the project and rising third-year law student, said the lawsuit represents a step toward a time when "all soldiers, male and female, can be judged on their individual capabilities rather than crude stereotypes."

"Not all women are capable of meeting the military's standards for ground combat, but all female servicewomen deserve the right to test themselves against those standards," he said. "This will not be an easy case, but we have complete confidence in the counsel at Covington & Burling and we are secure in the knowledge that we are on the right side of history. The question is no longer whether the combat exclusion policy will end, but when."
Posted by Syneeda at 10:40 PM

Military Ban on Women in Combat this is military new policies. I like this article and its detail discussion. Women on an equal basis to men and also participate in ground combat. Thanks for publish this lawsuit article.
Professional Legal Network

This article further demonstrates the dire need for the passage of the Equal Right Amendment. In today's society, more women are choosing to make personal sacrifices in order to further their professional careers. Unfortunately, there are many organizations where a woman would face the proverbial glass ceiling early in her career. The U.S. military is one of those organizations.