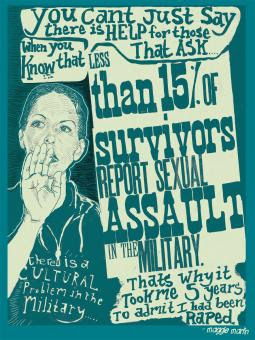 The Star advertiser reported last Friday:
Sexual assault is not only a crime that hurts the victim, but it damages the Navy as a whole, the commander of the Pacific Fleet said Thursday.

Adm. Cecil Haney said sexual assault can make sailors doubt their ships and leaders, creating a ripple effect that the Navy can't afford if it's going to successfully carry out missions from landing fighter jets on aircraft carriers to missile defense.

"It hurts all and has ramifications, quite frankly, that go well beyond just the individual and the perpetrator, but through the whole unit and in some cases through the missions and operations of the whole United States Navy," Haney said in an interview.

Haney spoke as a part of sexual assault awareness month, which the Navy is observing by putting its personnel through training.

The Pacific Fleet, which includes 160,000 sailors and other personnel, had 145 reported cases of sexual assault last fiscal year. So far this fiscal year, which is about halfway over, it's had 80. The trend is similar for the Navy as a whole.

In October, the former commander of the USS Momsen was sentenced to three years in prison for sexually assaulting and raping two female sailors. Earlier this month, two women sued Navy and Army secretaries, saying they were raped by classmates at the U.S. Naval Academy and the U.S. Military Academy at West Point.

Haney said the Navy needs to create a culture in which victims feel comfortable coming forward. He showed optimism this could be done, noting the Navy had had great success at combatting issues like discrimination over the years. The Navy also must show it will hold perpetrators accountable, regardless of where they are in the chain of command, he said.

"We know we can get at this as long as we keep at it," Haney said.

The training sessions have included information about what constitutes consent and how drinking alcohol can cloud judgment. The Navy is also encouraging sailors to intervene if they see something that troubles them.
"A lot of these things start at a nightclub, in a crowded setting, and people can see it start to go south, and I want them to step in," said Master Chief Petty Officer John Minyard, the Pacific Fleet's most senior enlisted member.

Food for thought:
Unfortunately Admiral Haney has his facts wrong about discrimination in the Navy. Let's just say, for several DECADES, the Navy has been moving at a snail's pace in combating issues relating to sexism and discrimination against women and minorities. 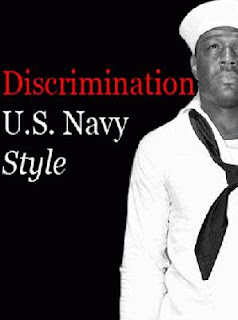 Sexism and Discrimination in the Navy is just as prevalent today as it was over 40-60 years ago, primarily within the officer ranks.

For several years, the DoD Military Leadership Diversity Commission (MLDC) has reported to Congress and President Obama, in its annual diversity report, ongoing issues of racial discrimination and the huge disparity of a lack of senior minority leadership throughout the entire Dept. of Defense.

The latest report provided statistics of all senior military officers who are serving on active duty, reporting the following breakdown: 77% are non-Hispanic white males, 8% are  non-Hispanic black males, 5% are Hispanic males, 4% are  Asian/Pacific Islander males, 1% other and 16% are women (racial statistics was not provided).

The report suggested an immense absence of minorities in senior leadership roles and is something that needs to change. The report also offered twenty recommendations on how to increase the proportion of minority officers in the military in order to create a fighting force that better represents the makeup of the population it defends.”

Unfortunately, there's not much the military has done to wage its war on combating discriminating besides unlawfully engaging in what I like to call the "Pyramid Effect".

This is when the military increases its quotas for minority enrollment at its military training institutions and significantly decrease its quotas of senior minority officers on active duty.  It's all a numbers game!

By engaging in this sort of "Gerrymandering" or "Pyramid Effect", after they graduate and go out into the fleet or battlefield,  junior minority officers will lack senior minority leadership.  Someone who they can relate to, inspire and mentor them, in becoming our military’s future “diverse” leaders of tomorrow.   But this is purposefully done to washout women and minorities early on in their military career.

If the Navy's "Good ol' Boys" would consider increasing its quota's in promoting MORE women in leadership roles, it might just help to resolve alot of its current problems regarding mistreatment of women in the Navy!
Posted by Syneeda at 8:59 AM

If "Sexual assault is not only a crime that hurts the victim, but it damages the Navy as a whole," then why isn't the Navy doing more about it? What we hear is that women are having to sue because nothing was done. In fact, reading this site, no one has contradicted the great expense to the taxpayer to cover up for the sexual predator that I've seen mentioned several times, William H. Weinfurtner. If it's a crime and damages the Navy as a whole then why are the taxpayers paying to cover it up? I mean, if this guy was really trolling for sex and wanting to "Free the Willy" and if it's true that the solicitations were caught on tape, why didn't the Navy do anything about it, that is, except pay to cover it up?

An upward trend in sexual assaults. Can you say "Queen of Denial" and "Culture of cover up."

Let me see if I understand the first Anon. This William H. Weinfurtner is playing hide the sausage on the taxpayer's dime, the Navy knew about it, and not only didn't the Navy comply with regulations, but the Navy then spent our money to cover it up? Has anybody been fired? Adm Haney, what gives? You got some splainin' to do!