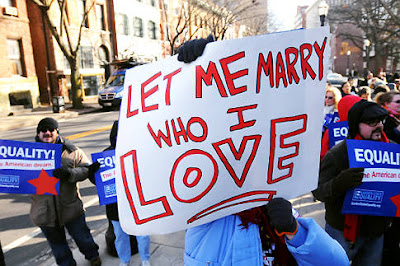 LA Times reported today:
"Obama supports gay marriage, taking a risky stand"
President Obama's decision to endorse same-sex marriage staked out a stance that carries uncertain political risks but one he said was rooted in the biblical admonition "to treat others the way you would want to be treated."
Obama's endorsement Wednesday, a milestone for the gay rights movement, was the first from a sitting president and a potentially powerful tail wind for a cause still struggling for electoral approval. It comes as the country remains divided over whether same-sex marriages should have the same recognition and legal standing as traditional ones, and six months before an election expected to be so tight it may hinge on small slices of votes in a handful of key states.
He equivocated for more than a year, saying that his position was "evolving." More recently, he came under considerable pressure — from his somewhat deflated base and a powerful network of gay donors — to speak his mind before the November election. His announcement was hastened by a similar declaration from Vice President Joe Biden on Sunday, which prompted calls for Obama to speak out or risk falling behind the curve.
"At a certain point, I've just concluded that for me personally it is important for me to go ahead and affirm that I think same-sex couples should be able to get married," Obama toldABC News' Robin Roberts in an interview hastily arranged by the White House to quiet the fallout from the Biden remarks.
Obama told the"Good Morning America"anchor that he arrived at the decision by talking to gay friends, staff members, his two daughters and his wife, who he said shared his support. His Christian faith and the golden rule factored in. "In the end, the values that I care most deeply about and she cares most deeply about is how we treat other people," Obama said.
Obama had cited religion in opposing same-sex marriages as he campaigned for president, but in December 2010 declared his position was evolving. That position was widely viewed as a wink and a nod to supporters of gay rights, who believed the president was withholding a public declaration of support out of concerns about alienating some key voters.
Nationally, a slim majority of voters favors gay marriages, according to most polls — a majority that has been increasing because of shifting attitudes among young people and middle-class voters. Still, religious, African American, Latino and older voters remain more likely to express opposition, and 38 states have adopted prohibitions of same-sex marriage, according the National Conference of State Legislatures.
Read more:  http://www.latimes.com/news/nationworld/nation/la-na-obama-gay-marriage-20120510,0,2388028.story

Despite what the laws says, you are not going to keep people from living together, having sex together and ultimately getting married!!