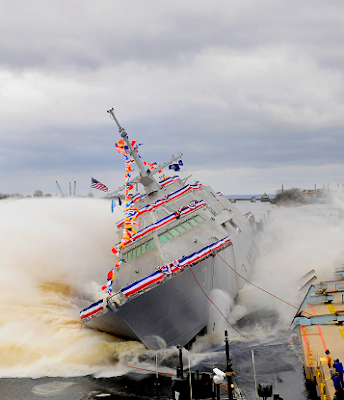 The Navy is wasting hundreds of millions of dollars on a combat ship that is cracking, flooding, rusting and can’t even keep its engines running.  But it’s also buying an alternate version of the ship that doesn’t have nearly as many problems—and costs $12 million dollars less per ship. So why is the Navy still pouring taxpayer dollars into the more expensive version that can hardly stay afloat?
We need you to contact your Member of Congress today and demand that the Navy stop wasting taxpayer dollars. But you have only a few days to make your voice heard. Next Wednesday, a key House committee will consider a major defense spending bill—and it’s our best chance to get the Navy to  stop throwing money down the tubes on this ship.
The Navy plans to use these close-to-shore combat ships to help bust drug traffickers and modern day pirates.  Keeping both versions of what the Navy calls the Littoral Combat Ship doesn’t make sense. The two versions have vastly different designs, so sailors and others who work on one ship aren’t properly trained to work on the other. This only makes naval operations less flexible and more expensive.
So which ship should the Navy choose? It should certainly take a hard look at POGO‘s recent findings that the version designed by Lockheed Martin has been plagued with equipment problems, serious cracks, and engine failures. When the ship was involved in a counter-drug trafficking operation—which included detaining suspected drug smugglers—the electricity on the entire ship went out, leaving it adrift.
We simply can’t afford to waste money on a floating lemon. This is the perfect opportunity to make the Navy set a deadline to choose between the two ships. We urge you to contact your Member of Congress on this issue today.
Please visit Project on Government website pogo.org or visit the link below to sign the online petition.
Read here:  https://secure3.convio.net/pogo/site/Advocacy?pagename=homepage&page=UserAction&id=270&autologin=true&JServSessionIdr004=hjkmzqlj73.app332b
Posted by Syneeda at 10:16 PM