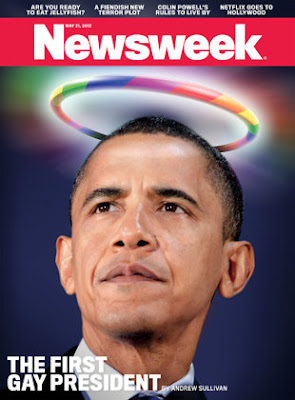 The Ticket reports:
It won't be nearly as controversial as Time magazine's breastfeeding cover, but Newsweek's May 21 issue declares Barack Obama the country's "first gay president."
The accompanying cover story was written by Andrew Sullivan, the popular--and openly gay--political blogger. The magazine even gives the commander-in-chief a rainbow halo.
Obama, Sullivan writes, "had to discover his black identity and then reconcile it with his white family, just as gays discover their homosexual identity and then have to reconcile it with their heterosexual family."
The full cover story is not yet online, but in a blog post published earlier this week, Sullivan wrote that Obama's support of gay marriage brought him to tears:

I do not know how orchestrated this was; and I do not know how calculated it is. What I know is that, absorbing the news, I was uncharacteristically at a loss for words for a while, didn't know what to write, and, like many Dish readers, there are tears in my eyes.
So let me simply say: I think of all the gay kids out there who now know they have their president on their side. I think of Maurice Sendak, who just died, whose decades-long relationship was never given the respect it deserved. I think of the centuries and decades in which gay people found it impossible to believe that marriage and inclusion in their own families was possible for them, so crushed were they by the weight of social and religious pressure. I think of all those in the plague years shut out of hospital rooms, thrown out of apartments, written out of wills, treated like human garbage because they loved another human being. I think of Frank Kameny. I think of the gay parents who now feel their president is behind their sacrifices and their love for their children.
The interview changes no laws; it has no tangible effect. But it reaffirms for me the integrity of this man we are immensely lucky to have in the White House. Obama's journey on this has been like that of many other Americans, when faced with the actual reality of gay lives and gay relationships. Yes, there was politics in a lot of it. But not all of it. I was in the room long before the 2008 primaries when Obama spoke to the mother of a gay son about marriage equality. He said he was for equality, but not marriage. Five years later, he sees--as we all see--that you cannot have one without the other. But even then, you knew he saw that woman's son as his equal as a citizen. It was a moment--way off the record at the time--that clinched my support for him.
Today Obama did more than make a logical step. He let go of fear. He is clearly prepared to let the political chips fall as they may. That's why we elected him.

The New Yorker, which is also out with a cover story on gay marriage, took a bit more subtle approach with its May 21 issue.

"It's a celebratory moment for our country, and that's what I tried to capture," Bob Staake, the artist behind the New Yorker cover, said. "I don't especially like those rainbow colors, but they are what they are—I had to use them."
He added: "I wanted to celebrate the bravery of the President's statement—a statement long overdue—but all the more appreciated in this political year. We are on the right side of history."
Posted by Syneeda at 1:23 AM