Justice Prevails Over Sexism and Racism Allegations in the U.S. Army 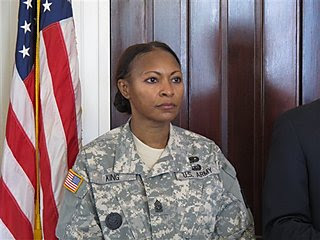 On Friday the AP reported - The first female boss at the Army's prestigious drill sergeant school is being reinstated after she was suspended in November for reasons the Army has never explained, her attorney and the Army said Friday.

Command Sgt. Maj. Teresa King, who is black, filed a military legal complaint over the suspension, arguing it was a result of racism and sexism from soldiers who resented her promotion and the national attention it attracted.

"To the Army leadership, I have devoted my life to train American soldiers. My removal was without justification," King said Friday.

Her attorney, James Smith, said she would return to her job as commandant of the drill sergeant school at Fort Jackson, the nation's largest military training installation.

"She's going to get reinstated," he said. "She's been vindicated."

The decision to reinstate her was made by Maj. Gen. Bradley May, the deputy commandant of the U.S. Army Training and Doctrine Command.

"Maj. Gen. May determined after a thorough review of the case that a release for cause was unwarranted and her suspension be lifted immediately," said Col. Christian Kubik, a TRADOC spokesman.

King's voice cracked briefly as she spoke to reporters Friday. She thanked God and the friends, family and fellow soldiers who believed in her and told the Army the allegations against her were untrue.

"There were dark days, and I wanted to quit," King said. "But the mission was too great. Had I quit, I believe I would have literally died."

The move comes after King's attorney filed a legal complaint Monday against two of her superiors. He also sought a congressional investigation into the matter, appealing directly to South Carolina's two senior members of Congress, Sen. Lindsey Graham and Rep. James Clyburn.

The complaint cited statements from King's deputy at the school and an Army colonel who worked with King. The attorney said younger soldiers who had spoken out against King had recanted their statements and that his own investigation had uncovered more than three dozen people who vouched for her high standards and good name.

In her rebuttal to the Army, King wrote her superiors, "My instincts tell me that if I were a male, that none of this would have happened."

In his complaint Smith provided an affidavit from Col. John Bessler, who was King's commanding officer when she was a drill sergeant and who visited her at the drill school after she was named commandant.

Bessler said "a good-ole boy 'network of disgruntlement'" had led to what he called "a character assassination campaign" against King because "her standards are higher than theirs are."

The complaint was filed against Maj. Gen. Richard Longo, who ordered King suspended, and his top enlisted aide, Command Sgt. Maj. John Calpena. The two men did not respond to email requests for comment on the story.

Calpena has done this to fellow soldiers before, Smith said. He was especially jealous of King because she was a woman and had not been in combat, the lawyer said.

I think I would be more inclined to believe the “Good-ole-Boy” response because King has higher standards, which may have rubbed someone the wrong way. It’s hard to say that it was based on race or sex without even knowing what the original allegation(s) might have been. I do believe that racism and sexism are definitely alive and well in the military. Just look at “guidance” given to selection boards when they are told to promote certain percentages of gender or a particular race based on an apparent study that resulted in a need to promote people just because they aren’t “properly” represented. That is the sexism and racism that still exists.
We can look at Holly Graf as an example. Did she rise to be the disgrace that she is just because she is female? Of course not. She got that way because someone said that there must be women in command of combatants. But don’t misunderstand the statement. ANY qualified person should have the opportunity. The problem was the sexism. It was ordered that women will command combatants, but no one should have looked the other way when reports of misconduct were made for more than 20 years, just because the Navy needed to make that decision succeed.
If there was misconduct in the King case that warranted firing, then she should have been fired. The fact that the Army has no apparent reason for the action raises serious questions of the misconduct of her superiors. And if that can be tied to race or sex, hang em high.

It looks like she really had those "Good ol' Boys" by the "balls", which is the only time "Justice Prevails" in the military!

No one will be held accountable. It'll be like a "Sturges." They'll say that corrective action has been taken by reinstating King. The perpetrator(s) get a free pass.