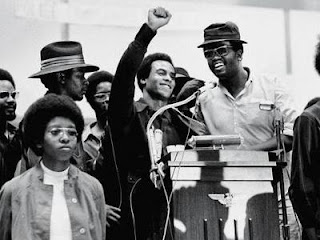 Grio.com reported today - Huey P. Newton, one of the most infamous leaders of the Black Panthers, has for decades represented a hyper-masculine perspective on the struggle for African-American equality and righteousness. So it may come as a surprise to some of his admirers that he also articulated a compelling case for the rights of the gay community. A 1970 speech he gave on this very subject has resurfaced and been re-posted in light of President Obama's about-face on the issue of same-sex marriage. Here are some highlights:

Remember, we have not established a revolutionary value system; we are only in the process of establishing it. I do not remember our ever constituting any value that said that a revolutionary must say offensive things towards homosexuals, or that a revolutionary should make sure that women do not speak out about their own particular kind of oppression. As a matter of fact, it is just the opposite: we say that we recognize the women's right to be free. We have not said much about the homosexual at all, but we must relate to the homosexual movement because it is a real thing. And I know through reading, and through my life experience and observations that homosexuals are not given freedom and liberty by anyone in the society. They might be the most oppressed people in the society.

And what made them homosexual? Perhaps it's a phenomenon that I don't understand entirely. Some people say that it is the decadence of capitalism. I don't know if that is the case; I rather doubt it. But whatever the case is, we know that homosexuality is a fact that exists, and we must understand it in its purest form: that is, a person should have the freedom to use his body in whatever way he wants.

Later on in his remarks, Newton asserts:

We should be careful about using those terms that might turn our friends off. The terms "fa**ot" and "punk" should be deleted from our vocabulary, and especially we should not attach names normally designed for homosexuals to men who are enemies of the people, such as [Richard] Nixon or [Attorney General John] Mitchell. Homosexuals are not enemies of the people.

Syneeda, I've noticed your support for Gay Rights, with all that African Americans have gone through over the decades (centuries) with their (your) struggle for equality and civil rights, and considering your ordeal with the military, I know why you support them!! I'm proud of your stance for equality and human rights!

non,
A close friend, who's Italian American, sent me a facebook msg and asked why I'm such a strong supporter of President Obama and he didn't want to hear the typical "It's a black thing" response. My response didn't require a lot of thought and I would like to share it with you...

As far as my view on President Obama, well first and foremost I fully stand behind his support for “Gay Rights”. Yeah, the economy is awful, but so are gas prices, the middle class, wall-street, our government and our congress, but like you mentioned, we (Americans) have been down this road before and our economy recovered, even stronger than before.

But, how close have we come to getting laws passed for equal (civil) rights for ALL Americans, not since the passage of the 1964 Civil Rights Acts. Had it not been for President Kennedy and LJB, America will not be the America it is today!

Americans must learn to how to make sacrifices for one another and stop looking at greed as the center of their existence, God is!! And he can wipe it all away with one single natural disaster!

As long as America doesn’t end up like a third world country, then I can wait out a few more years for the economy to turn around...

Watching the republican GOP debate, listening to Mitt Romney’s proposals on using our military to gain “world dominance” made me cringed, because I’m fully aware of the billions of tax dollars that are being wasted towards funding our military.

It’s an endless bank account that is invisibly bleeding our economy dry. It’s just as bad as healthcare and the housing market crises. There is too much finger pointing from both sides of the house and congress should focus more on unifying Americans, not dividing Americans.

...Mitt Romney, what he stands for goes completely against my moral beliefs.