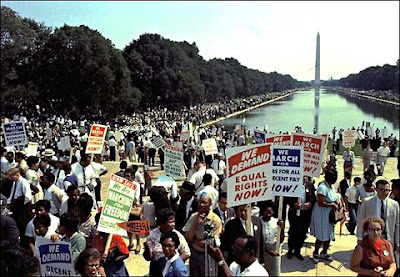 Politico.com reports - A coalition of African American ministers and civil rights leaders are standing behind President Barack Obama's decision to back same-sex marriage, seeking to dispel the notion that the black community is sharply divided on the issue.
The coalition -- including the Rev. Al Sharpton of the National Action Network; Julian Bond, Chairman Emeritus of NAACP; Melanie Campbell and the Rev.Dr. Joseph Lowery, a civil rights legend and close Obama ally -- released an open letter late last week embracing Obama’s position on marriage equality.
"Dr. Martin Luther King, Jr. once said, 'Injustice anywhere is a threat to justice everywhere.'" the letter states. "As leaders in today’s Civil Rights Movement, we stand behind the President Obama’s belief that same sex couples should be allowed to join in civil marriages. We also affirm that individuals may hold different views on this issue but still work together towards our common goals: fair housing and equitable education, affordable health care and eradicating poverty, all issues of deep and abiding concern for our communities."
When Obama announced he was in favor of gay marriage, advocates in the gay rights community cheered. But the president's announcement touched off a raging debate among African Americans, where public opinion on same-sex marriage is closely split.
Some predicted Obama's marriage stance would harm him among black voters: some objected to framing the gay marriage question as a civil rights issue, while others predicted the opposition of socially conservative black ministers would hamstring the president's get-out-the-vote effort in an election expected to be close.
In the letter, the coalition said Obama was correct to announce his belief that gays should have the right to marry.
"As civil rights leaders we cannot fight to gain rights for some and not for all," according to the letter. "At the same time, we acknowledge that the President stated his personal opinion, which everyone is entitled to – both those who agree with him, like us, and those who disagree. The president made clear that his support is for civil marriage for same-sex couples, and he is fully committed to protecting the ability of religious institutions to make their own decisions about their own sacraments."