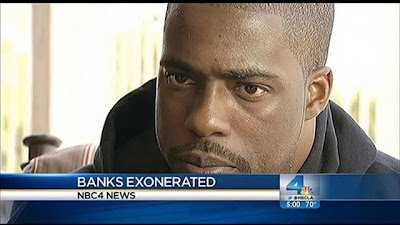 LOS ANGELES (AP) — A former high school football star whose rape conviction was thrown out this week plans to file a claim against the state but will not sue the woman who recanted the sexual assault accusation she made a decade ago, his lawyer said.
Brian Banks will seek $100 from the state for every day he was wrongfully incarcerated, Justin Brooks, an attorney with the California Innocence Project, told the Los Angeles Times.
Banks spent five years in prison after pleading no contest to forcible rape. A judge threw out the conviction on Thursday.
Wanetta Gibson was a 15-year-old high school sophomore when she accused Banks of raping her at Long Beach Poly High School. She received a $1.5 million payment from a civil suit brought by her mother against Long Beach schools.
Prosecutors have said they have no immediate plans to charge Gibson, now 24, with making false accusations, saying it would be a tough case to prove. Brooks told the Times that Banks would not file a claim against Gibson.
Police in Long Beach said there is no official investigation into Gibson’s conduct, but officers are “reviewing the matter” and “will be in consultation with the district attorney’s office following the review,” spokeswoman Lisa Massacani told the newspaper.
In a strange turn of events, Gibson, friended Banks on Facebook when he got out of prison.
During an initial meeting with him, she said she had lied; there had been no kidnap and no rape and she offered to help him clear his record, court records state.
But she refused to repeat the story to prosecutors because she feared she would have to return payout from the civil suit.
During a second meeting that was secretly videotaped, she told Banks, “‘I will go through with helping you, but it’s like at the same time all that money they gave us, I mean gave me, I don’t want to have to pay it back,’” according to Freddie Parish, a defense investigator who was at the meeting.
Gibson did not attend Thursday’s hearing and she could not be reached for comment.
Banks, once a star middle linebacker at Long Beach Polytechnic High School, had attracted the interest of such college football powerhouses as the University of Southern California, Ohio State University and the University of Michigan, according to the website Rivals.com, which tracks the recruiting of high school football and basketball players.
Banks said he had verbally agreed to attend USC on a scholarship when he was arrested.
On Thursday he said he still hopes to play professional football.
Posted by Syneeda at 9:03 AM