Today the LA Times reported:
The paratroopers had their assignment: Check out reports that Afghan police had recovered the mangled remains of an insurgent suicide bomber. Try to get iris scans and fingerprints for identification.

The 82nd Airborne Division soldiers arrived at the police station in  Afghanistan’s   Zabol province in February 2010. They inspected the body parts. Then the mission turned macabre: The paratroopers posed for photos next to Afghan police, grinning while some held — and others squatted beside — the corpse's severed legs. 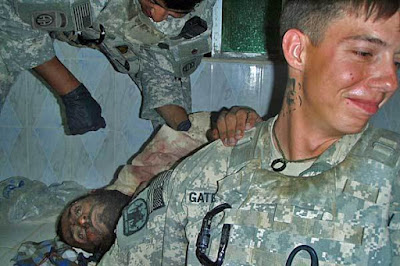 A few months later, the same platoon was dispatched to investigate the remains of three insurgents who Afghan police said had accidentally blown themselves up. After obtaining a few fingerprints, they posed next to the remains, again grinning and mugging for photographs.

Two soldiers posed holding a dead man's hand with the middle finger raised. A soldier leaned over the bearded corpse while clutching the man's hand. Someone placed an unofficial platoon patch reading "Zombie Hunter" next to other remains and took a picture. 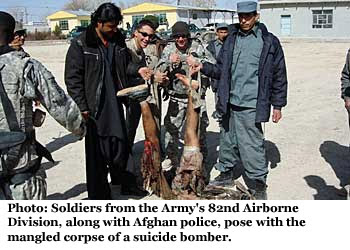 The Army launched a criminal investigation after the Los Angeles Times showed officials copies of the photos, which recently were given to the paper by a soldier from the division.

"It is a violation of Army standards to pose with corpses for photographs outside of officially sanctioned purposes," said George Wright, an Army spokesman. "Such actions fall short of what we expect of our uniformed service members in deployed areas."

Wright said that after the investigation, the Army would "take appropriate action" against those involved. Most of the soldiers in the photos have been identified, said Lt. Col. Margaret Kageleiry, an Army spokeswoman.

The photos have emerged at a particularly sensitive moment for U.S.-Afghan relations. In January, a video appeared on the Internet showing four U.S. Marines urinating on Afghan corpses. In February, the inadvertent burning of copies of the Koran at a U.S. base triggered riots that left 30 dead and led to the deaths of six Americans. In March, a U.S. Army sergeant went on a nighttime shooting rampage in two Afghan villages, killing 17.

The soldier who provided The Times with a series of 18 photos of soldiers posing with corpses did so on condition of anonymity. He served in Afghanistan with the 82nd Airborne's 4th Brigade Combat Team from Ft. Bragg, N.C. He said the photos point to a breakdown in leadership and discipline that he believed compromised the safety of the troops.

He expressed the hope that publication would help ensure that alleged security shortcomings at two U.S. bases in Afghanistan in 2010 were not repeated. The brigade, under new command but with some of the same paratroopers who served in 2010, began another tour in Afghanistan in February.

U.S. military officials asked The Times not to publish any of the pictures.

Capt. John Kirby, a Pentagon  spokesman, said the conduct depicted "most certainly does not represent the character and the professionalism of the great majority of our troops in Afghanistan.... Nevertheless, this imagery — more than two years old — now has the potential to indict them all in the minds of local Afghans, inciting violence and perhaps causing needless casualties."

Kirby added, "We have taken the necessary precautions to protect our troops in the event of any backlash."

Times Editor Davan Maharaj said, "After careful consideration, we decided that publishing a small but representative selection of the photos would fulfill our obligation to readers to report vigorously and impartially on all aspects of the American mission in Afghanistan, including the allegation that the images reflect a breakdown in unit discipline that was endangering U.S. troops."

The photos were taken during a yearlong deployment of the 3,500-member brigade, which lost 35 men during that time, according to icasualties.org, a website that tracks casualties. At least 23 were killed by homemade bombs or suicide bombers.

Suicide attacks on two bases of the brigade's 1st Battalion, 508th Parachute Infantry Regiment killed six U.S. soldiers and four Afghan interpreters. The platoon whose soldiers posed for the photos was part of the battalion.

The soldier who provided the photos, and two other former members of the battalion, said in separate interviews that they and others had complained of inadequate security at the two bases.

An Army investigation into a July 2010 suicide attack in Kandahar that killed four U.S. soldiers found that senior members of the battalion had complained about security. But it concluded that force protection measures were "reasonable and prudent" in the face of limited resources.

this is a disgrace!

Kahana another example of failed military leadership. Obviously the soldier who sent these photos to the LA Times is concerned for his safety and the safety of his fellow soldiers. On the flip side of this, it also reminds me of the movie "Jarheads", how the Marines were so psyched up, they were thirsting for blood. As if this soldier is trying to warn us of something.

This morning there were already over 500 comments to this article and most of them seemed to make excuses for the actions of these soldiers. Because of military downsizing and ongoing re-deployment of our soldiers, a large majority of our troops are suffering from PTSD and are not getting any treatment before they redeploy.

Since this 10 year war, the quality of the men the military is recruiting is so below standard, it's beginning to reveal itself.

Once you consider the military rape epidemic and the increasing numbers of veterans who are now being sent to prison (after they get out of the military), these guys have no respect for women, much less for themselves. Therefore incidents like this doesn't surprise me.

What concerns me is top military officials continuing to turn the blind eye wrt the disburbing behavior of our veterans.

A complete lack of leadership from the lowest to the highest levels. There had to be NCOs somewhere at the time and probably a platoon leader; someone saw this happen and let is slide. Now the army is going after the Soldiers in the pictures AND they should address their leaders' failure at the time.

Steve, I totally agree. I'm appauled at all the stories I've been reading about when it comes to "failed" military leadership. I'm sure there are hundreds more that the "Pentagon" has managed to convince the media to keep a lid on, similar to Syneeda's story which is why I can't wait for her to release her book. I'm sure she will let us know what really happened.