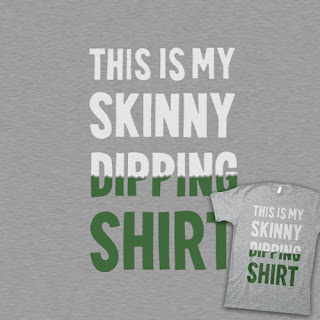 Yesterday Navy Times reported:
By nightfall June 3, what began as an officer’s move-in bash at her new apartment in Bahrain’s Floating City was getting out of hand. Partiers had been drinking all day Friday. And the party had spilled from her patio onto rafts in the canal alongside.
Then, something startled her guests, a mix of colleagues from her command, friends and neighbors: The host stripped off her bikini top.
The party — while not an official command function — included enlisted, junior officers, and even the commanding officer of her 100-member logistics task force based in Bahrain. The sight of her topless changed the party’s dynamic. Men drew closer to leer. Another woman removed her top. And a man took off his pants, exposing himself. While guests stared, all three went skinny-dipping.
That’s when the commodore jumped in.
Capt. David Geisler, commodore of the logistics task force responsible for supplying all naval assets in 5th Fleet, who had spent the afternoon drinking and floating in an inner tube on the canal, removed his bathing suit and swam nude, witnesses said.
His participation in this and other such parties would lead to his firing later in the year, according to an investigation into his and others’ behavior in Bahrain.
Because the canal is lined with condominiums on both sides, their frolic was in “plain view” of neighbors and passersby on the street, investigators later concluded, noting that Geisler had been the most senior officer at the party.
When the party crossed the line from rowdy to lewd, some left. Neighbors, upset with the late-night commotion, complained afterward to the host’s landlord, as well as housing officials at the naval base. But none of the partygoers reported anything to higher-ups.
This became the first of many parties at the junior officer’s Floating City apartment over the next five months, where the combination of binge drinking, mingling of officers and enlisted members, and public nudity ran afoul of both 5th Fleet liberty standards and cultural norms in Bahrain, an Islamic country where women commonly wear modest dress and head coverings, and public displays of affection as mundane as holding hands are frowned upon.
Read more:
http://www.navytimes.com/news/2012/04/navy-bahrain-bash-commodore-david-geisler-040812w/?utm_source=twitterfeed&utm_medium=twitter

Food for thought:
This article doesn't surprise me the least bit, because this is the sort of thing that goes on overseas in isolated military commands.

Navy Times staff writer, Sam Fellman did an excellent job detailing the "drunken and nude" behavior of senior Navy officers in the presence of junior enlisted sailors.  What's appalling about their behavior is that it took place in an Islamic country in pubic view.

A few years ago, top brass Navy officials decided that my alleged conduct of specious allegations of committing adultery was so "Unbecoming of a Officer" that it warranted a trial by court martial, fine of $9,000, confinement in prison for 2 months and subsequent discharge from the Navy without my retirement pension, when I was only 8 months shy of my 20 year retirement eligibility.

If this isn't a classic case of "double standards" and "selective prosecution", then I don't know what is.

But, I shall not fret over the actions of the Navy's senior top brass because their judgement day is coming sooner than they realize!!
Posted by Syneeda at 7:49 AM

"When the party crossed the line from rowdy to lewd, some left."

But none of the partygoers reported anything because they feared reprisal.

"Neighbors, upset with the late-night commotion, complained afterward to the host’s landlord, as well as housing officials at the naval base."

And the festivities continued for five more months after officials at the naval base were notified! Amazing. Talk about maintaining international relations when complaints were made and no one does anything. Sounds a little like the response that you get from an IG when the IG wants to cover up. If something is so obvious and the "higher-ups" just don't want to see it, it's no wonder the effort that is put out to cover-up fraud, waste and abuse, and the retaliation that is inflicted and the misuse of taxpayer dollars to inflict that retaliation.

One more time in case the Navy Leadership didn't see it above. You're in a foreign country and supposed to be good neighbors...misconduct is reported to Navy officials and...no one does anything! Get it!

It took months for Navy officials to take the complaints of the infamous "Holly Graf" seriously, but thanks to Navy Times and other news sources she was finally relieved of command. Only if the military is threatened either by an "international incident" or release to the media, will they act upon complaints of misconduct.

I'm so thankful that Navy Times posted details about my story a few days into my court martial trial, otherwise I will still be in prison.

I will never forget the look on Judge Redcliff's face when Messer walked into the courtroom (during recess) and said, "Her story is on the internet!" This was before I was denied a continuous of my trial to find a new attorney.

My entire trial was a joke, but they knew I was facing a 16 year prison sentence and needed to "Silence Me" the best way they knew how.

In the case of all the commanding officer's getting fired, that alone speaks for the Navy's senior leadership... Enough said!

This doesn’t surprise me at all. Years, and years, and years of covering up sexual misconduct finally resulted in the current CNO admitting that there is a problem, as you noted in a prior posting on admiral Greenert. There is no doubt that the extensive cover-up over the years has resulted in the belief that cover-ups would continue and Captain Geisler, no doubt, thought that he was untouchable. The failure of the Navy to do anything for months says a lot about the desire to do nothing and cover-up.

I looked up and read the article on the “Standdown to stop sex assault” after it was mentioned in another posting. I was appalled to actually see the statement by Vice Admiral Scott Van Buskirk that there will be training on how to deal with “a command climate that encourages offenders.”

That statement tells me that the Navy is and has been well aware of command climates that not only encouraged offenders but then covered-up for them. And, it was the fact that the command covered-up for them that encouraged the offenders in the first place. I also read some comments about the cover-up at the FISC (Fleet and industrial Supply Center) in San Diego. About the guy, William H. Weinfurtner, who is known as Slick Willy, who wanted to entertain Willy junior. He wanted to “Free the Willy” by soliciting women to have sex with him, and the command encouraged it, paying lots of money to cover-up for the Secretary of the Navy and Slick Willy. I wonder why Navy commands are always changing names. This one changed to the NAVSUP Fleet Logistics Center, San Diego (FLCSD), and you have to wonder if all the name changing is to try to disassociate themselves from a past history that tied the command to an encouragement of offenders.

It’s been a while, but not too long from the William H. Weinfurtner cover-up, there was another cover-up at the FISC or FLCSD. This individual, Timothy J. Pentaleri, who a former desk mate described as a hand-pick by the Executive Director, Michael Stames, would also troll the federal workplace. Everything was hushed and covered-up. The encouragement of the hushing and cover-up only makes things worse and the Navy just doesn’t get that. Anyway, the Michael Stames hand-pick was also an Army Reserve officer who was obviously plotting a sexual assault or worse, but the civilian authorities weren’t going to give him a free pass, or a “Sturges” as it’s been called. He was charged with attempted kidnapping and two counts of attempted harassment/stalking. He was found carrying a knife, pepper spray, a collapsible baton and a stun gun. Inside his vehicle was a large plastic liner, duct tape, plastic flex cuffs, rope and a shovel. When police searched his duffel bag they found condoms, a pillow case, sheets cut into strips, a camera, a turkey baster, KY jelly, a bag of plastic gloves, two bags of zip ties, a package of Bic lighters, two-sided tape, shoe polish, a pair of nylon socks and Clorox disinfectant wipes. There was also a flowcharted abduction plan and details of how he would “club her hard.”

After being well trained and encouraged by the Navy, only one question remains: What’s the shoe polish for?

The Pentaleri scumbag has a number of articles about his arrest and guilty plea that can be found on the web. So he received his "Trolling Training" from the Navy! Yes, the Navy leadership has plenty of explaining to do for all the cover-ups and the only thing they can think of now is to spend more of the taxpayer's money on more training by claiming that senior officers--and senior civilians--don't know the difference between right and wrong. Who can't see through this crap of an excuse?

I agree with each of you viewpoints especially the latest Anon's comment, "Wasting more tax dollars on more training by claiming that senior officers--and senior civilians--don't know the difference between right and wrong"... So, how in the hell were they allowed to be promoted to Capt and CO in the first place... SMH, that's how the Good ol' Boy system works. It amazing me how "Holly Graf" conduct made international news but stories like this one, and others relating to misconduct of senior white male officers, will seldom be told to the public!

Geisler should put in his chit asking for a Sturges (free pass). What does he have to lose? At some point the Navy has to realize that if some people are "let off" while others are railroaded, the American people might take notice!