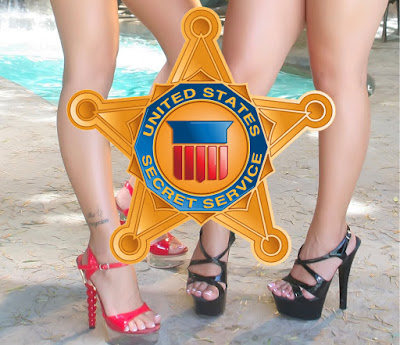 CARTAGENA, Colombia—The Secret Service put 11 agents on administrative leave Saturday amid allegations they brought prostitutes back to their hotel rooms while preparing for a visit by President Barack Obama, a widening scandal that may also involve five military service personnel, officials said Saturday.

The Secret Service agents were caught when one of the women stayed in an agent's room past 7 a.m., in violation of hotel policy, said Rep. Peter King (R., N.Y.), chairman of the House Homeland Security Committee, which oversees the Secret Service. That agent initially refused to open his door for the hotel manager, which prompted the manager to call the police, who later reported the incident to the U.S. embassy, Mr. King said.

Also Saturday, the United States Southern Command said in a written statement that five U.S. service members assigned to the summit violated curfew and "may have been involved in inappropriate conduct." The statement continued: "The conduct is alleged to have occurred in the same hotel where the recalled United States Secret Service agents were staying."

The military personnel are confined to their quarters in Colombia and under orders not to have contact with other individuals. They will return to the U.S. after the mission is complete, the statement said. An investigation will follow. The Secret Service agents involved in the incident, which occurred Wednesday night, were sent home and replaced by other Secret Service personnel before Mr. Obama arrived on Friday, officials said.

General Douglas Fraser, commander of the U.S. military's Southern Command, said that he is "disappointed by the entire incident and that this behavior is not in keeping with the professional standards expected of members of the United States military."

Secret Service Assistant Director Paul S. Morrissey said in a statement that 11 agents had been put on leave following interviews in Washington about the incident on Saturday. He said the group included both special agents and Uniformed Division officers.

He said the situation had "had no impact on the Secret Service's ability to execute a comprehensive security plan for the President's visit to Cartagena."

"This incident is not reflective of the behavior of our personnel as they travel every day throughout the country and the world performing their duties in a dedicated, professional manner," he added. "We regret any distraction from the Summit of the Americas this situation has caused."

Mr. Obama is attending the weekend Summit of the Americas, a gathering of dozens of regional leaders, as more details emerge about the potential security breach. Mr. Obama is pressing for trade and economic advances while addressing regional grievances against U.S. policies, but the incident is threatening to overshadow the weekend's agenda.

Mr. Obama was notified of the situation on Friday, a spokesman said.

He said hotel policy requires that people visiting hotel guests leave identification at the front desk, and depart by 7 a.m. At 7 a.m., hotel personnel noticed one woman had not yet left the hotel, he said.

The hotel manager went to the room, occupied by a Secret Service agent, who would not open the door, Mr. King said. The manager called the police, after which the agent let them in. The woman wouldn't leave, claiming she was owed money by the agent. The agent denied owing her money but paid anyway, Mr. King said. The woman left and the situation was resolved without arrests.

Whenever the police become involved with an incident involving someone from another country, they file a report with the relevant embassy, Mr. King said. At the U.S. embassy, some Secret Service personnel saw the report and began an immediate investigation, he said.

He said the special agent in charge of the Miami field office heard about the incident and began her own investigation.

The director of the Secret Service, Mark Sullivan, decided the agents needed to be brought back to Washington, where they are based, immediately, Mr. King said. Their duties were filled by other agents from Miami and Puerto Rico, who were in place before Mr. Obama arrived, he said, adding, "there was no gap in security."

Mr. King said he was disturbed by the situation because of the potential compromise to the president's security.

"You can't have Secret Service agents compromising themselves or putting themselves in a position where they could be threatened or blackmailed," he said. "That ultimately threatens the safety of the president."

He added that bringing strangers like this into a potentially secure area is "just wrong." In addition, he said, they might have overheard sensitive information. Plus, he noted, the hotel manager had seen the women's identifications.

"The hotel manager can blackmail you for the rest of your life," he said.

Mr. King said he was pleased how Mr. Sullivan, the agency director, handled the situation, and said he has "a lot of faith" in him.

"I'm not going to indict the entire Secret Service because of this," he said. "The question is what you can do to minimize them from happening and how do you take action to make sure it does not happen again and conduct is not being tolerated."

He said none of the 11 agents involved had any prior offenses or irregularities.

He added he plans to have his Homeland Security Committee staff look into the situation.
Ronald Kessler, a Washington-based author who wrote a book about the Secret Service, called it "the biggest scandal in Secret Service history," he said.

Prostitution is generally illegal in Colombia but the country has "tolerance zones" where the activity is essentially ignored by the police. It's not clear if the hotel was in one of those zones.

White House spokesman Jay Carney said the president has full confidence in the Secret Service and its ability to protect him.
Posted by Syneeda at 5:02 PM

I wonder if the Secret Service will just provide more training for their agents on how to behave...or whether the head of the Secret Service realizes that the agents crossed the line and should be fired. Regardless of whether Columbia has "tolerance zones" and whether that hotel was within a tolerance zone, did these agents and military personnel possibly contribute to trafficking in persons? Oh, but prostitution is still illegal in Columbia even if police ignore it in the so-called tolerance zone. So, now the agents and the military personnel have committed a crime in a foreign country.

I wonder what our President's action will be. There are many sticky wickets in this matter.

What is going on in America, can't MEN learn how to say NO?! Wait a minute, the word NO isn't apart of their vocabulary!

In one of your earlier blogs there was some discussion about the Commander-in-Chief and why he has not yet ordered appropriate investigations into the obvious failures of Whistleblower laws and the need to enhance them. If I recall, your comment was that the President had many other things to do. I think that someone commented that he need only give the order and it would happen.

With the recent Secret Service sex scandal, it appears that it took the President but a few seconds to say "I expect that investigation to be thorough and I expect it to be rigorous."

A similar order regarding the many failures of current Whistleblower laws would start the wheels turning very quickly. There are certainly enough victims of failed Whistleblower protection to provide excellent testimony. The order just needs to be given. It’s just that simple. By the way, a very appropriate picture for the topic of the Secret Service sex scandal.

Anon, I wish it was as easy as closing my eyes and wishing the President would order an investigation into my entire case, from beginning to end.

I'm not Dorothy and I'm not in Kansas.

Has he personally interviewed any of the military rape victims or their attorney? I don't believe so. And neither has Congress, only senior military officials, to hear "their side of the story."

Unless my case is fully resurrected and gain national and international media attention, would senior government officials order an investigation.

As you can see with a number of my post, the last thing America and the military needs is another scandal, especially one involving a certified "Whistleblower" who was sent to prison for reporting FRAUD and the DoD IG covered it up!!

I don't think anyone has investigated the Secret Service sex scandal yet, but the order has been given! I'm certain the President won't be conducting any of the interviews, either! The point is, when something is covered up, it's only that much more egg on the face and that much more embarrassing when it finally comes out. Yes, that is the reason for wanting to keep it covered, but when enough people at the right level get involved something will happen. You mentioned the DoD IG cover up. The head facilitator of the DoD cover ups, Leonard C. Trahan Jr., is all over the web with stories of how he helped to cover up crime and how he facilitated the frame ups of innocent people who blew the whistle. It looks like he is in hiding because not much is being heard from him lately. It's even questionable if he is still the Hotline director. Maybe someone finally got the hint that too much crime was being covered up!

There’s a rumor that the General Services Administration (GSA) is going to invite the Secret Service to its next Las Vegas outing. It seems that GSA, for the more than $820,000.00 of our tax dollars spent (wasted) at the lavish party, had everything but the prostitutes…so inviting the Secret Service would apparently round-out the festivities. Martha Johnson, the former head of GSA, apologized and resigned for her failure and there is another rumor that certain individuals are seeking the resignation of the head of the Secret Service.

It looks like the fallout from the Secret Service Sex Scandal in continuing. How arrogant of a senior SS (not to be confused with the even more infamous SS) agent to post a picture of him "checking out" Sarah Palin on his Facebook page. These SS just must have thought that they were untouchable. So, there's more scrutiny on the SS, more scrutiny on GSA, but......senior military still do what they want to do and there is no one to stop them because the IG is anything but independent!