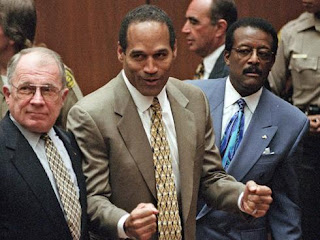 USA Today reports: A new book has a very new twist on O.J. Simpson and the 1994 murders of his ex-wife Nicole Brown Simpson and her friend, Ron Goldman.
In O.J. Is Innocent and I Can Prove It, author and private investigator William C. Dearcontends the real killer was Simpson’s son from a previous marriage, Jason Simpson.
“Everything we have in the book is documented. It is not theory or hypothesis. It is fact,” Dear told The Huffington Post.
Dear says he spent nearly 20 years researching the case and claims to have the knife used in the murders.
“When I tell you we have the weapon — we found the weapon in Jason’s storage facility that he failed to make payments on,” Dear told the website. “We know he carried it — his initials were carved in the leather sheath.”
Huffington Post says Jason Simpson is now 41 and works as a chef in Miami, but he couldn’t be reached because his listed phone number had been disconnected.
Dear also alleges he has the son’s diaries and vehicle from when the murders occurred. His book also contends Jason’s history of personal troubles included suicide attempts and an assault on an employer with a knife.
O.J. Simpson was acquitted of the murder charges in a criminal trial but a civil suit filed by the victims’ families found him liable for the deaths, and awarded $33.5 million in damages. The former NFL star and Heisman Trophy winner is currently in prison in Nevada, serving time for armed robbery and kidnapping convictions.
Posted by Syneeda at 9:39 PM