Was this a Political move for the U.S. Navy? 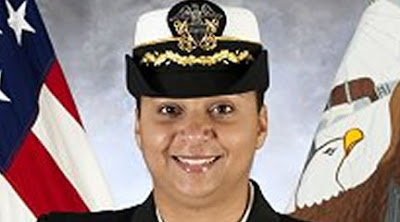 "It says that you do whatever you want to do, whether it's in the military or not and don't let anyone tell you that you can't," Stoker said.

She relieved Cmdr. Brian Sorenson, who served as commanding officer for two years.

Food for thought:
As "Black History Month" slowly draws to an end, the Navy wanted to go down in history to prove they are still moving at a snail’s pace on improving racial and gender equality.

I must admit, the headline of this article did immediately grab my attention.

I was a bit disappointed after reading the last sentence; "CDR Stoker had served as the XO onboard the Mitscher since June 2010.”

Having served in the Navy for nearly 20 years, I view this as a slap in the face, not just to women of color, but to all female Surface Warfare officers.

Instead of transferring CDR Stoker to a new ship where she could competitively test and prove her leadership skills, the Navy chose to let her “fleet up” and assume command of a ship she’d served on for over a year in a half.

Is this a fair or unfair advantage?!

The Navy was definitely playing it safe this time; I guess they wanted to avoid another "Holly Graf" incident.

I'm sure we all recall the infamous Holly Graf, nicknamed by journalists, "Horrible Holly".

Unfortunately while in command of both ships the Navy's poster child failed miserably as a leader.  In early 2010 the former Commanding Officer of the USS Cowpens was relieved of command after creating an extremely hostile working environment and poisonous atmosphere for her crew.

Her story is one of the worse examples of proven failed Navy leadership, yet one of the best examples of military workplace abuse.  Even after numerous allegations of mistreatment of her crew members were substantiated by a Navy IG investigation, next month Captain Graf will be retiring from the Navy with her full pension intact.

She will most likely be offered a handsome defense contracting position, like the rest of her fellow Navy Academy graduates.

Despite the outcome of the Navy’s final IG investigation reports, indicating my chain of command did not commit reprisal acts against me, Holly’s mistreatment of her crew members will never measure up to what they did to me.  I'll save those details for a later blog and further in-depth details are outlined in my memoir.

I'm sure she will continue to be an outstanding leader and prove to the Good ol' Boys, " Women don't have to be a tyrant and act like one of them to get the job."

I wish her much success as the new Commanding of the USS Mistcher.

If it was a political move, I don't think it was a smart move. Changes of command happen all the time, and most don't get published like this. If I was that new CO, I think I'd be embarrassed that the Navy announced it like that: "the first African-American woman"...it makes it sound like she was selected because she was Africa-American and a woman, rather than because she was competent. Assuming she's a competent officer, I don't see a point in mentioning anything else. Of course, the Navy likes to play to the media, as if we don’t really know what’s going on.
I hope she turns out to be a great CO, but let’s also hope that if that’s not the case, we don’t see the same cover-up as in the Graf case. After all, the Navy mandated that women should be in equal positions as men, and that’s a good thing, but to force things results in Graf-like people getting there when they shouldn’t, and in extreme instances, dead aviators. Navy leadership has been living in a dream world -- thinking that if they order it to happen, it will, and since they ordered it, it must be the right decision and it must succeed. That’s exactly what happened with Graf. The need for success of that order allowed Graf to continue as the tyrant she is, destroying lives along the way.
As far as the fleet-up, wasn’t Owen Honors the XO before he became the CO?

Anon,
Yes, Captain Owens was the XO of the USS Enterprise before he was promoted to become their next commanding officer, which was all the more reason why he deserved to be relieved of command.
I fully understand the need to properly groom someone to prepare them to take over a major military command assignment but it’s just as important to properly screen that person’s background before they are promoted to such a high profile assignment. The Navy has always been better at teaching its leaders to prepare for damage control instead of teaching them how to prepare for a more diverse Navy.
Since I’ve been advocating against workplace abuse, I’ve received countless emails and phone calls from minority officers who are being discriminated against and they are not in the Surface Warfare community.
Each of them are ready to take their cases to the media and are prepared to speak out about how sexism and discrimination is just as alive in the Navy today, as it was over 40 years ago.
A few of them are white male officers who recently announced they are homosexuals. Because the Navy censors and prohibits active duty and mobilized reservists from speaking out against the military they are not able to share graphic tales of their abuse.
Recently an African American Nurse Corps officer filed an equal opportunity complaint to report the actions of her immediate supervisors reprising against her. She believes her superiors are trying to ruin her career by going after her clinical license. Instead of her CO commencing an investigation into her complaints, the CO ordered she undergo a mental health evaluation. The CO’s justification for the MHE was the LT is delusional and is only imagining she’s being discriminating against.
Because Commanding Officers are giving the authority by Congress to determine what complaints are valid and invalid, they ultimately make the final decision on what claims to investigate and what not to investigate.
What senior white Naval officers are doing towards minority officers (today) is no different than what they did before the passage of the Civil Rights Acts.
America is still practicing “Jim Crow” laws; they’ve only found clever ways to disguise it.
CDR Stoker’s promotion to commanding officer is a significant triumph for African American history because it says “We’ve come far, but we still have a long way to go!”
If her tour is as successful as we hope, I would be the first one standing in line at her book signing!!

Ordering someone to undergo a mental health evaluation is a very common practice for a Commanding Officer. Their heads have grown so big that think that anyone who would question their authority must be crazy. That effort almost never pans out because those who bring matters to the attention of the command usually have more honor, courage, and commitment than the CO who now feels that he or she needs to retaliate. What it shows is the desperation of a CO who has committed a wrong. Any CO who orders a mental health evaluation should be immediately investigated by an independent investigative body. That means other than the Navy or DoD Inspector General, because we know that the Navy and DoD are in bed with each other to cover-up as much as possible. An MHE should be considered the first event in the retaliatory process that commences as soon as a complaint is lodged with the command.

Unfortunately CO’s fail to realize when they set out to abuse their subordinates the abuse ends up traumatizing the victim. As I demonstrated in a previous blog, I had difficulty writing and talking what I went through during the week of 26-30 March 2007 must less my entire ordeal. Each time I try to think about that week, I began to experience panic attacks, they are similar to the same attacks I had while I was being abused. I also experience these attacks each time the LT contacts to me give me an update on her situation.
I shared details of my deteriorating health with Navy IG and DoD IG investigators, the EO investigating officer, the members of the BOI hearing and in my petition for an injunction. No one addressed my health concerns and now I’m disabled. Had I been treated equally and provided whistle blower protection, I would either still be serving my country or working for a fortune 500 Company, my command officials took that away from me. It will take an act of Congress or the President to stop workplace abuse from happening against other veterans.

One of my friends just informed me that most ships are doing a "fleet up" for command and the plan is that all XOs will fleet up to become the ship's next commanding officers. I say "Bravo Zulu" to our Navy for no longer setting junior Surface Warfare Officers up for failure!!

I just came across this article. CO/XO Fleet-Up has been in place for years. It has been in practice with the Aviation community for years and the Surface Warfare community adopted the practice a year or two prior to Stoker taking command. When a officer step onboard a DDG as the XO, he /she is essentially stepping onboard as the CO in waiting.

She was selected b/c she is competent officer, who happens to be a black woman. The press made a bid deal of her race and gender, not the Navy.