Sexism in the Military 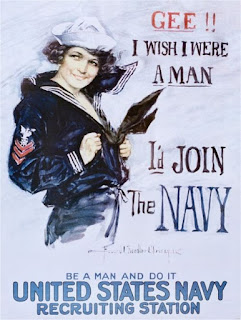 When I came across the article from yesterday’s blog and saw the picture posting the shower hours for male and female soldiers it brought back too many memories of my active duty days in the Navy.
For almost a year, when I was the Supply Officer department  head stationed onboard the USS STOUT, I served as the only female onboard the entire ship.  Each time I had to use the restroom or take a shower I had to turn a dial which was mounted on the center of the door to indicate a female officer was inside.
For months I debated with the upper chain of command about getting more females onboard the ship.  Most importantly, outfitting the ship to have a designated female restroom (head).   It took about a year before the ship received 3 additional female officers, until then, working with all does men was an interesting and unique challenge.
Each time my number was called during a command urinalysis testing I had to walk across the pier to another ship which had over 10 or more females to have one of the young female officers observe me, “peeing into a cup”.  Boy was that embarrassing. 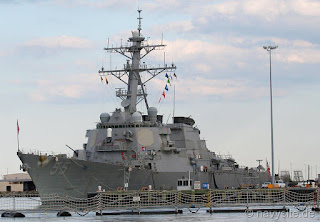 There were many occasions when I would encounter sexism and racism.  I was often called the “B” word and the “N” word but the worse criticism of them all came when I was told by the Executive Officer (XO) that a few of my male colleagues were of the opinion that females don’t belong onboard a Navy warship, they belong at home in a kitchen.  At the end of the Equal Opportunity investigation, I sadly learned that the XO also shared the same opinion as my sexist colleagues.
Lucky for me, I had a Commanding Officer (CO) who aggressively resolved any and all conflicts I brought to his attention.  Unfortunately not all COs are proactive in resolving valid complaints made by female service members.  They would rather turn the blind eye in an effort to protect their own career vice take appropriate actions to reprimand or punish male service members for their inappropriate or illegal actions towards women.
BRAVO ZULU to Jessica and the other brave veterans who have decided to hold the former and current Secretary of Defense accountable for the actions of the officers under their watch.   Let’s just hope the new Chairman of the Joint Chiefs of Staff, Gen. Dempsey is willing to listen to the cries of our female service veterans before it gets to a higher level.
Unlike ADM Mullen, who ignored my cry for help. 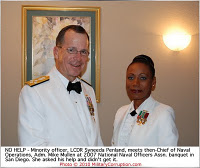